Abat: Forged by Mindanao, from warrior to peacemaker 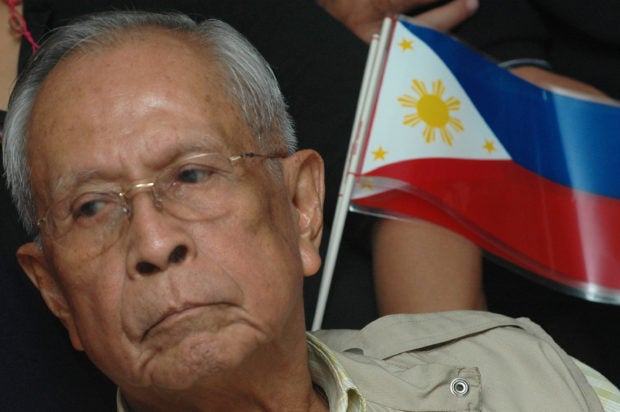 Former Defense Secretary Fortunato Abat, known in the military as a warrior who tried to quell the rebellion in Central Mindanao when it was just starting in the 1970s, passed away on Wednesday night. He was 92.

His eldest son, Victor, said that Abat had been confined at Veterans Memorial Medical Center since Jan. 25.

“His heart was giving up,” he added.

Old age finally caught up with the man who, in many respects, was part of the country’s history.

In a statement, Department of National Defense (DND) spokesperson Arsenio Andolong said the DND “mourns the loss of (the) former Defense Secretary and commanding general of the Philippine Army … We thank him for his service to the nation.”

Abat, a member of the Philippine Military Academy (PMA) Class of 1951, was married to the former Corazon Bulatao, a teacher from San Carlos, Pangasinan. They had six children.

Musing on his father’s long life, Victor described it as “already a bonus.”

Former President Fidel Ramos, who fought in the Korean War with Abat, managed to visit his longtime friend and key ally in the hospital. Abat later became Ramos’ defense secretary for nine months, until Ramos’ term  ended on June 30, 1998.

Before taking on the defense portfolio, Abat served as chief peace negotiator for the Ramos administration’s talks with the Moro National Liberation Front (MNLF), which led to a peace agreement.

The chief peace negotiator’s role  brought Abat back to the early days of the MNLF separatist war, when he led the pacification campaign to quell the brewing rebellion.

For this, Abat gained the respect of the military, many of whom, like retired Lt. Gen. Alan Luga, fought in the conflict years later.

Hours after Abat died, Luga paid tribute to the man by posting several pictures of him as a young military commander rallying his troops in the field and exchanging salutes with fellow officials like Luga’s own father, retired Gen. Emilio Luga Jr.

Other soldiers gave their final salute to Abat in heartfelt social media posts.

“One of the few great warriors who answered the call when the going was at its roughest in Mindanao. Rest in peace, Sir!” wrote former Armed Forces of the Philippines chief of staff, retired Gen. Alexander Yano, on Luga’s post.

Abat was in charge “the day we almost lost Mindanao,” Yano said, quoting the title of Abat’s book.

At the start of the MNLF rebellion in many parts of Mindanao, several rebel groups had taken control of many areas. The AFP troops were few and ill-prepared to meet a full-blown rebellion in the early ’70s,” recalled Yano, who graduated from the PMA in 1976.

As one of the senior military officials during martial law, Abat was directed by then President Ferdinand Marcos to organize the Central Command (Centcom) from Cebu to respond to the rebellion. 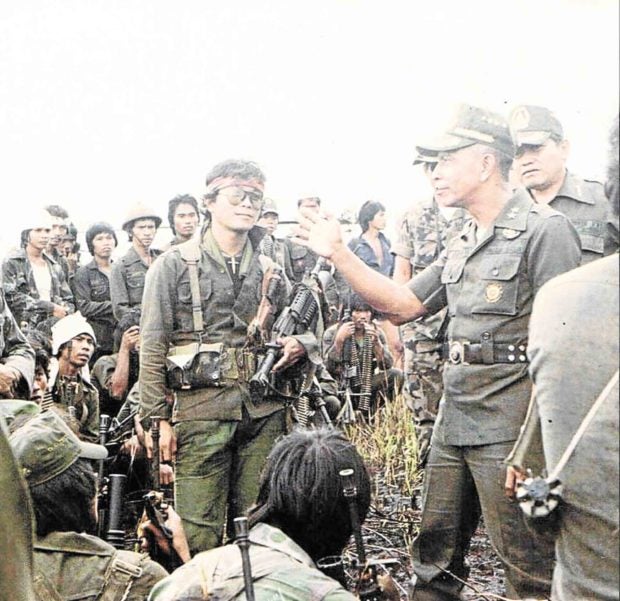 Former defense chief Fortunato Abat, shown here talking with members of an armed rebel group, is hailed by retired generals both as a great warrior and a peace negotiator. Abat passed away on March 7 at age 92. —CONTRIBUTED PHOTO

“Centcom commander, General Abat commanded the troops and turned the tide, thus saving Mindanao from being severed from the Republic,” Yano said.

Luga, of PMA ’81, said the Centcom became “the forerunner of Southern Command, from where the concept of the present unified commands was based. Abat’s leadership pacified Central Mindanao in the 1970s.”

Abat went on to become the Army commanding general. It was during his term that his sons Victor, of PMA ’77, and Tito, of PMA ’78, began their early years as soldiers.

Tito was a second lieutenant when he was killed in action in Samar in 1979.

Said Victor: “Daddy, as the Army chief at that time, could have assigned Tito somewhere where it was safer, but he allowed his sons to go where the conflict was. He never gave us any special treatment.”

Even after his retirement from the military in 1981, and from government civilian service years later, Abat remained involved in several veterans, civic and business organizations.

He was also active in the country’s political affairs, and called for the resignation of then Presidents Joseph Ejercito Estrada and Gloria Macapagal-Arroyo, now a Pampanga representative, when both became embroiled in corruption allegations.

Abat was arrested in 2005 for declaring a revolutionary government and installing himself as its President.

“Daddy was very idealistic,” Victor said, recalling with a chuckle how “vocal” his father was during the Arroyo presidency.

Abat lies in state at Loyola Memorial Chapels on Commonwealth Avenue in Quezon City. Interment will be on Tuesday, March 13, at Libingan ng mga Bayani in Taguig.