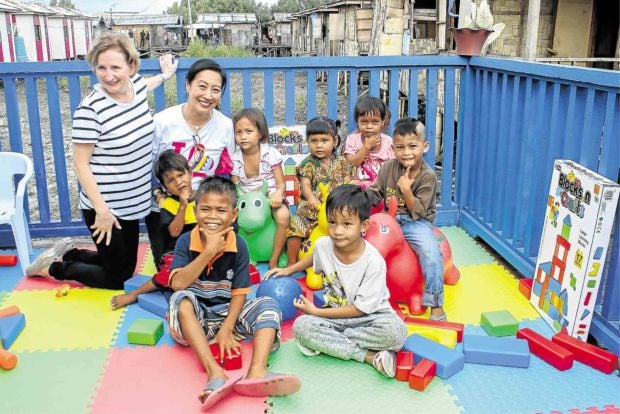 ZAMBOANGA CITY — The evil spirits that had haunted Nora Adain since she fled her home in Rio Hondo have all but vanished.

“I am happier now,” said the 33-year-old, one of the Badjaos, or sea gypsies, moved to a permanent resettlement site at Vale Vista in this city, which was engulfed in fighting for three weeks in September 2013.

“I have a house now,” said the widow, a mother of three children.

“I have a livelihood,” she added, referring to a P10,000 assistance grant she had invested buying and selling fish.

She pointed to the latticed bamboo walls of the 22-square-meter hut, cooled by the breeze from the sea.

“The wind drives away evil spirits. It makes you feel good,” she said.

But Adain broke down in tears as she recalled the good life in Rio Hondo before her diabetic husband, a dockyard porter, died, and the area was leveled in the fighting between government forces and the Moro National Liberation Front.

The uprooted were then classified into “tagged,” the property owners who were given priority, and the “untagged,” or those who had rented or shared spaces with landlords.

The Badjaos fell through the cracks as “untagged.”

Three years ago, the Australian government stepped in with a P103-million grant to shelter the Badjaos and help them stand on their feet. The  Community and Family Services International  implemented the assistance program, in collaboration with the city government, the Catholic  Relief Services (CRS) and the World Health Organization.

The Badjaos originated from Basilan and Sulu, living in houses on stilts along the sea. Over the past decades, the peace-loving nomads have scattered in the region, torn by separatist movements and criminal gangs.

Rio Hondo, where the fighting in 2013 was centered, had been a tough slum district through which criminal gangs escaped to the sea after committing atrocities in the city. The area was flattened in the standoff that left 240 people dead. The Office of Civil Defense put the damage at P3.3 billion.

On March 2, Australian Ambassador to the Philippines Amanda Gorely traveled to Vale Vista, a resettlement site for 3,400 households, including the 400 Badjao families uprooted from the Rio Hondo area, to officially hand over the projects launched for the sea gypsies and their host communities.

Aside from housing, the assistance involved livelihood programs for 1,000 families, assistance in acquiring civil documentation, such as marriage and birth certificates, psychosocial counseling, and health and disease surveillance.

Security was tight. Troops in full combat gear and sniper dogs roamed the maze of huts on stilts built around wooden pathways 1.82 meters (6 feet) above black slime strewn with garbage. A drone circled overhead as Gorely, accompanied by City Mayor Beng Climaco, trudged the precarious boardwalk in the 38-hectare area that used to be a salt-making field and mangrove swamp.

“I could only imagine the fear and trauma you experienced during the fighting and the hardships after having lost your homes and livelihood,” Gorely said in her remarks during the turnover.

While expressing satisfaction that the housing, livelihood support and adult education programs had restored some sense of normalcy and dignity in the community, Gorely also noted the need to provide water, electricity and sanitation services in the resettlement site. 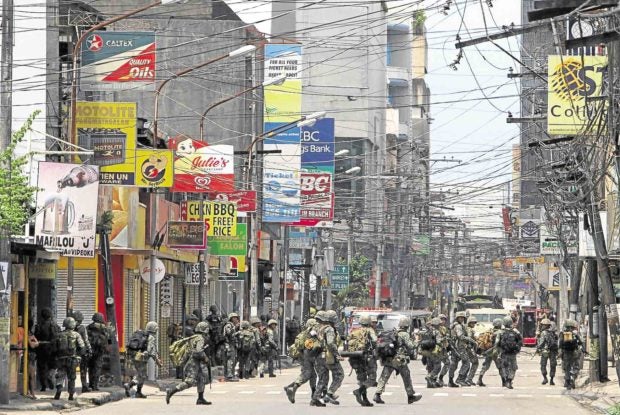 Zamboanga during the MNLF siege

Climaco admits the situation at Vale Vista is “far from ideal.”

“The mud and the slime are still part of the culture of the Badjaos,” she said, noting that they had insisted that they be settled close to the sea where they could earn a living.

The mayor also expressed unhappiness at the P2.9-billion Zamboanga resettlement program of the National Housing Authority (NHA), which  recently announced it had turned over to beneficiaries 4,000 shelters. Another 2,000 units are still to be completed.

“The NHA housing has proven to have some substandard materials,” Climaco said, adding that the permanent shelter residents might become evacuees again.

The  NHA houses are made of cement and fiberboards, called hardiflex, and iron roofing which, a UN study found, had not been designed according to the Badjaos’ culture and spiritual beliefs.  The walls, for one,  block the flow of ancestral spirits that give positive guidance to the family.

In contrast, the huts built by CRS have latticed bamboo walls and no ceilings to separate the corrugated iron roofing, making the structure airy.

The livelihood project, meanwhile, involved an initial cash grant of P10,000 and a second tranche of P8,000. Some 1,000 recipients, including Tausugs and Catholics, underwent counseling and guidance on basic financial management and bookkeeping. The money has been invested in “sari-sari” stores, fish vending and ready-to-wear, among other ventures.

Considered a key to mobility, the documentation program allowed the Badjaos to send their children to public schools, qualify for the government’s Pantawid Pamilyang Pilipino Program, providing a  monthly grant of P1,400 to finance schooling and health care, and eventually access Philhealth benefits.

So far, some 2,600 of the displaced have been provided documentation that the uneducated Badjaos had never before bothered to secure.  The process stepped up after a computer was donated to the civil registrar in Zamboanga.

While optimistic about the security situation—“zero kidnapping, zero bombing in the past two years,” Climaco rued that after Islamic militants rampaged in Marawi City and engaged troops in a five-month standoff last year, the threat to Zamboanga,  the main port city in southwestern Mindanao, “will always be there.”

But thanks to the literacy program, Adain, a former laundry woman, now knows her 3Rs (reduce, reuse, recycle) and has invested in the fish business. She intends to see her three kids through school.

Almalyn Jakaral, 24, a mother of three, is also a graduate of the literacy program.  She had attended Grade 1 but learned to sign her name only now.

Last month, Jakaral and her family received their marriage and birth certificates. Neighbors happily told them that they could now apply for a passport and become an overseas Filipino Worker.

There is genuine appreciation among the Badjaos for the assistance they have received so far as they embark on a new life after the tragic Zamboanga siege.

“We escaped after the fighting broke out,” said Jakaral’s husband, Jakaria, 39, a fish vendor. “We were scared. We did not want to get involved.”

Now the future looks brighter for the Jakarals in their clean and spare hut.

“We came from the bottom, we worked hard. Somehow, we have managed to move up, little by little,” Jakaria said. 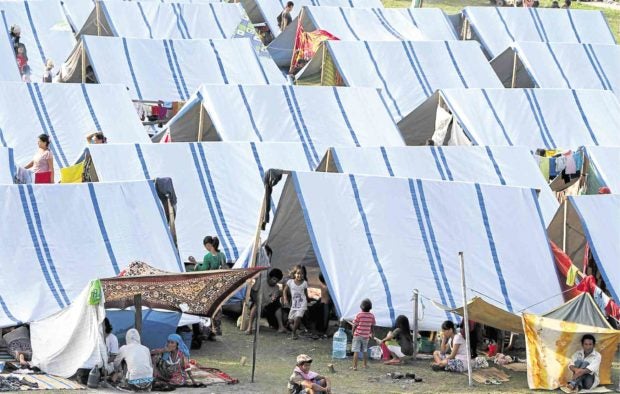 The tent city for the evacuees. —PHOTOS BY EDWIN BACASMAS

Read Next
US health group backs e-cigs too
EDITORS' PICK
A delightful blessing!
Gov’t plans to open COVID-19 vaccination for 5- to 11-yr-olds by January 2022
Gov’t eyeing COVID-19 vaccine booster for essential workers, indigents by Dec. 10
Villar Group gears up for AllValue Shopping Party on Dec. 3; around P 1-million promos and discounts up for grabs
Omicron variant detected in more countries as scientists race to find answers
Legarda: Ending Violence Against Women, a cause for all
MOST READ
Quiboloy warns of ‘much worse than Omicron virus’ if his ‘persecution’ is not stopped
Marcoleta defends pol ads on ABS-CBN
MMDA: Number coding during afternoon rush hours back this week
PH updates ‘red list,’ travel ban imposed on 7 more countries
Don't miss out on the latest news and information.