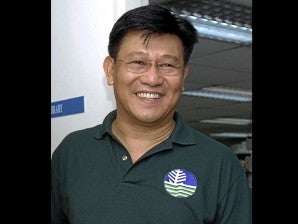 MANILA, Philippines – Environment Secretary Ramon Paje pledged to provide “straight and true service” on Friday after hearing news that he was to become a permanent member of the Aquino Cabinet.

Paje, in an interview on Friday, said he was grateful that President Benigno Aquino III permanently appointed him to head the Department of Environment and Natural Resources. “I am grateful for the President’s confidence in me. I assure the President of my straight and true service,” he said.

Paje, a former undersecretary at the Department of Energy and Natural Resources (DENR), has been serving as acting environment secretary pending his permanent appointment. Although he was heading the agency under an “acting” capacity, Paje said it did not affect his work.

“I did not consider it as part of my performance. I worked thinking I was a ‘casual’ employee. No one is a permanent member of the Cabinet,” he said.

Until Friday, Paje’s fate was uncertain. A few weeks before President Aquino’s declaration in Bangkok, it was reported that Paje would leave the DENR to make way for losing Liberal Party senatorial candidate Nereus Acosta, an environment advocate and former congressman.

Acosta himself admitted that he was being considered by Aquino to head the environment department and vowed to “clean up” the agency.

In a statement issued on May 11, Acosta also pledged to get rid of corruption, protect the environment, and encourage the mining industry. He also said that he was a victim of a smear campaign to block his bid as DENR chief.