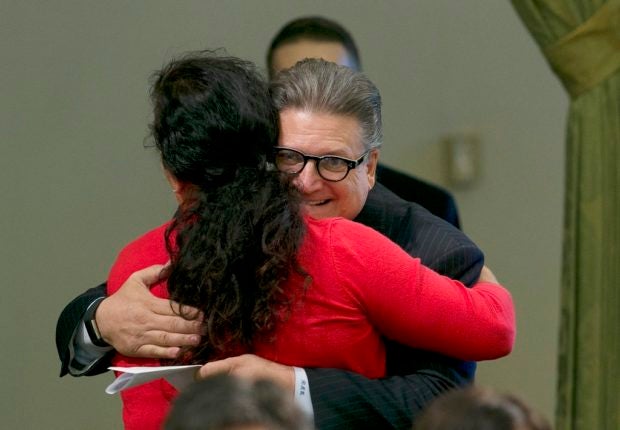 In this August 31, 2017 photo, State Senator Bob Hertzberg (D-Van Nuys) hugs Assemblywoman Lorena Gonzalez Fletcher (D-San Diego) after his storm water bill was approved by the Assembly in Sacramento, California. Hertzberg has been told to stop hugging people after a sexual misconduct investigation concluded his behavior made multiple colleagues uncomfortable. Hertzberg was formally reprimanded on Tuesday, March 6, 2018, by the Senate Rules Committee. The Los Angeles-area says he will respect the request not to hug people. (AP Photo/Rich Pedroncelli, File)

SACRAMENTO, California — A California state senator has been told to stop hugging people after an investigation concluded that his trademark embraces made multiple female colleagues uncomfortable.

However, the investigation released on Thursday found Senator Bob Hertzberg’s frequent hugs are not intended to be sexual and more often than not are not unwelcome.

Hertzberg, a Democrat from the Los Angeles area, has earned nicknames such as “Hugsberg” and “Huggy Bear” for greeting men and women alike with giant hugs.

The Senate Rules Committee formally reprimanded him on Tuesday and told him not to hug people anymore, but he will not otherwise face discipline.

Hertzberg released a letter apologizing to anyone who felt his frequent embraces were unwelcome. The 63-year-old said he has greeted people with hugs all his life and they were intended as “a gesture of warmth and kindness and a reflection of my exuberance.”

“I understand that I cannot control how a hug is received, and that not everyone has the ability to speak up about unwelcome behavior,” Hertzberg wrote. “It is my responsibility to be mindful of this.”

Three California lawmakers have resigned over allegations of sexually explicit misconduct, with one stepping down while facing the threat of expulsion.

The investigation into Hertzberg covered four complaints dating back to 2010, involving three female lawmakers and a male sergeant at arms. It found he hugged two current and one former lawmaker in ways that made them uncomfortable and made the sergeant uncomfortable by “dancing briefly with his backside” against him.

None of the accusers are named, but former Republican Assemblywoman Linda Halderman has previously spoken to reporters about her accusations against Hertzberg. She said Hertzberg repeatedly hugged her for prolonged periods of time during her term from 2010 to 2012 and at one point thrust into her after she told him to stop.

Halderman declined to speak with the investigators from an outside law firm hired by the state Senate. The investigators concluded Hertzberg made her uncomfortable but couldn’t find any evidence supporting that he continued to hug her after she asked him to stop.

Investigators found Hertzberg stopped hugging the second accuser in 2015 after she told him to stop, and that he was unaware that his hugs of another assemblywoman were unwelcome.

Republican Senator Joel Anderson of Alpine said it was concerning that none of the accusers are named because it shows the Legislature does not have enough protections for people filing claims.

He also said it’s difficult to be fair to everyone involved if names are withheld.

Hertzberg said the allegations against him were exploited by opponents as he proposed overhauling California’s money bail system for offenders awaiting trial. Hertzberg also said the Legislature should do a better job of keeping harassment complaints confidential during investigations.

Investigators noted Hertzberg has been warned about uncomfortable hugs in the past – including of a 2015 complaint from a staff member who said he held her close and began dancing with her. They faulted Hertzberg for not taking past complaints more seriously, but also criticized the Senate for not giving him enough information about the complaints against him.

“He missed opportunities to understand that some people were genuinely troubled by his hugging,” investigators wrote, later adding, “more information may have resulted in Hertzberg correcting his conduct with respect to unwanted hugs earlier.”

Hertzberg was elected to the state Senate in 2014 after serving six years in the Assembly.

Democratic Senator Ben Allen of Santa Monica said he couldn’t say if the investigation or reprimand were appropriate because senators not sitting on the Rules Committee were only given a summary.

“It’s a sensitive investigation and I’ve got a lot of sympathy for everybody involved,” he said.      /kga