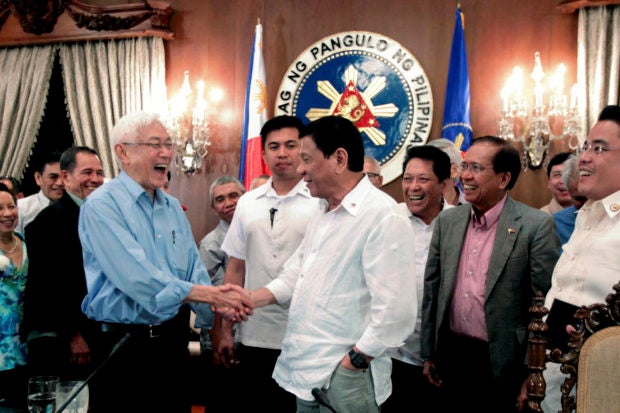 A government petition seeking to declare the Communist Party of the Philippines (CPP) and its armed wing, the New People’s Army (NPA), terrorist organizations also sought to tag a UN special rapporteur, a former lawmaker, four former priests and at least 600 individuals as terrorists.

In a motion filed in the Manila Regional Trial Court Branch 19 on Feb. 21, the Department of Justice (DOJ) included the UN special rapporteur on the rights of indigenous peoples, Victoria Tauli-Corpuz, and former Bayan Muna Rep. Satur Ocampo on its list of terrorists.

Corpuz, a former chair of the UN Permanent Forum on Indigenous Issues, was named UN special rapporteur in 2014.

Last December, Malacañang said Corpuz and a fellow UN rapporteur, Cecilia Jimenez-Damary, were “partisan” and were trying to embarrass the Duterte administration in saying that extending martial law in Mindanao could lead to more human rights abuses of the “lumad” (indigenous people).

Ocampo is facing murder charges in the Manila Regional Trial Court for his alleged involvement in the murder of suspected military spies in the communist movement in the 1980s.

In a statement, Corpuz said she was not a terrorist and denounced the military for linking her to the communist movement.

“I will address this baseless, malicious and irresponsible inclusion of my name even as I am consulting my lawyers on what legal courses of action to take to clear my name and even make accountable those who put my life and security at risk,” she said.

Corpuz founded the indigenous peoples advocacy and research group, Tebtebba Inc., and helped draft the Declaration on the Rights of the Indigenous Peoples, which was adopted by the United Nations in 2007.

Ocampo said he would challenge any “terrorist” label.

Sison said Mr. Duterte was launching a wild anticommunist witch-hunt “to silence all his critics and opposition to his cruel and corrupt regime, and in order to realize completely his fascist dictatorship.”

“It is Duterte who is truly the No. 1 terrorist in the Philippines,” he said in a statement sent to the Inquirer on Thursday.

He said he had won a legal case to remove his name from the European Union’s list of terrorists.

Four former Catholic priests were also named in the case, including Frank Fernandez, who the government said was an NPA leader in the Visayas. There was no immediate comment from Fernandez.

Under Section 17 of Republic Act No. 9372, or the Human Security Act of 2007, the DOJ must first seek clearance from the court before an organization, association or group of persons could be designated terrorist.

Signed by Senior Assistant State Prosecutor Peter Ong, the DOJ petition claimed the communist rebels aimed “to overthrow the duly constituted authorities and to seize control of the Philippine government through armed struggle.”

By declaring the groups and individuals terrorists, the government would be able to monitor them more closely, track finances and restrict their access to resources, among other things.

The petition cited at least 12 incidents allegedly committed by the rebels “to sow and create a condition of widespread and extraordinary fear and panic among the populace in order to coerce the government to give in to its unlawful demands.”

More than 40,000 people have been killed in the Maoist rebellion. Negotiations have been on and off since being brokered by Norway in 1986.

Upon assuming office, Mr. Duterte promised to seek a political settlement with the communist rebels to end one of Asia’s longest-running insurgencies.

As concessions to the rebels, he appointed several leftist activists to his Cabinet and released jailed communist leaders to participate in peace talks.

Mr. Duterte later denounced the rebels, saying they continued attacks on soldiers and police, and extorted and collected revolutionary taxes.

Prior to the court petition, Mr. Duterte signed Proclamation No. 374 declaring the rebel groups terrorist organizations.

Mr. Duterte considers communist rebels as much of a security threat as a plethora of domestic Islamist militants who have pledged allegiance to Islamic State. —WITH REPORTS FROM VINCENT CABREZA, DELFIN T. MALLARI JR.