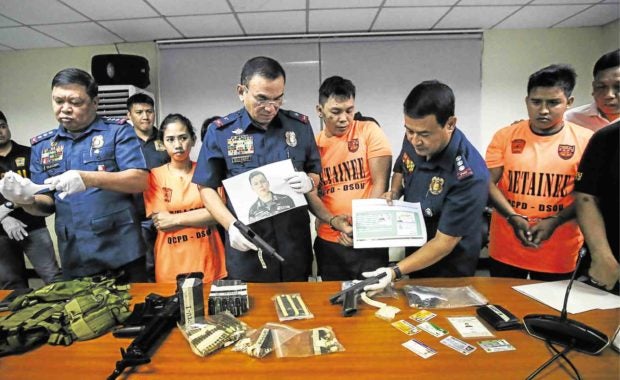 Five days before his scheduled deployment to Camarines Sur province, an Army lieutenant was arrested with two others in a drug sting that set off a car chase in Quezon City on Wednesday night.

The Quezon City Police District (QCPD) said 2nd Lt. Hamel Samsodin, 31, was commissioned as a reserve officer in 2009, went into active duty in 2016, but had been involved in the illegal drug trade since 2011.

Samsodin; his live-in partner Aslimah Aliba, 23; and his relative and alleged drug courier Mohair Masicuin, 28, are facing charges for selling 25 grams of “shabu” (crystal meth) in a buy-bust operation conducted by the QCPD and the Armed Forces in Mapayapa Village 1, Pasong Tamo.

When they sensed that they were dealing with an undercover agent, the three tried to escape in a car but were cornered by the arresting party in Barangay North Fairview, the QCPD said.

Also confiscated from the suspects were a hand grenade, two .45-caliber pistols and the Hyundai Accent sedan that they used in their escape attempt.

The Army officer was set for deployment as a platoon leader under the 83rd Infantry Brigade in Pili, Camarines Sur, on March 12, Eleazar added.