UP Diliman loses another campus landmark to fire | Inquirer News

UP Diliman loses another campus landmark to fire 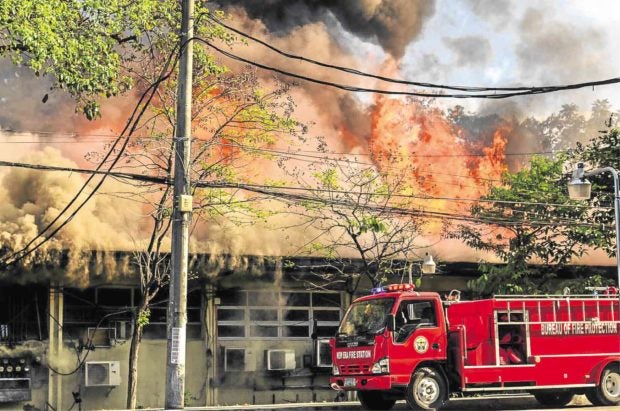 The UP Diliman Shopping Center is the fifth building on the campus to go up in flames since 2010. A fire on Thursday destroyed the one-story structure housing 48 shops. —CONTRIBUTED PHOTO BY MIKKO RINGIA

The University of the Philippines campus in Diliman, Quezon City, has lost another landmark to a fire, the fifth to go up in flames over the last eight years.

The Shopping Center, or SC as it was fondly known to the UP community, was destroyed in a fire that raged for almost two hours on Thursday morning.

Senior Insp. Le Roy Enriquez of the Bureau of Fire Protection (BFP) estimated the damage to the structure—which housed 48 stalls, including the original Rodic’s Diner branch—at P500,000.
According to the BFP, a security guard reported that he saw smoke coming from the ceiling, leading investigators to look into faulty electrical installation as the possible cause.

The loss of the storied SC, a one-stop shop for many campus needs—from printing and photocopying services to eateries and university merchandise—was another source of heartache for the UP community.

The one-story structure was the fifth structure on the campus to be destroyed by a fire since 2010. In 2015, the Casaa, a similarly beloved canteen, and the Alumni Center burned down just months apart.

In April 2016, a fire razed the UP Faculty Center, a historic building that hundreds of professors had called their home for decades. Lost in that blaze was a wealth of books, research and archival materials.

On June 9, 2010, a fire broke out at the Institute of Chemistry building, reaching the fifth alarm before it was placed under control the next morning.

In the aftermath of Thursday’s fire, UP Diliman Chancellor Michael Tan maintained that the campus had been compliant with fire safety laws, saying that the state of extinguishers, sprinklers and the wiring itself was subject to regular inspections.

“We are compliant, especially for the Shopping Center. We could not take chances because of the high traffic of students here,” Tan said.

The concessionaires would be transferred as soon as possible to temporary relocation sites on the campus, he said.
Based on the initial assessment, the SC’s current structure may no longer be salvageable, Tan added. 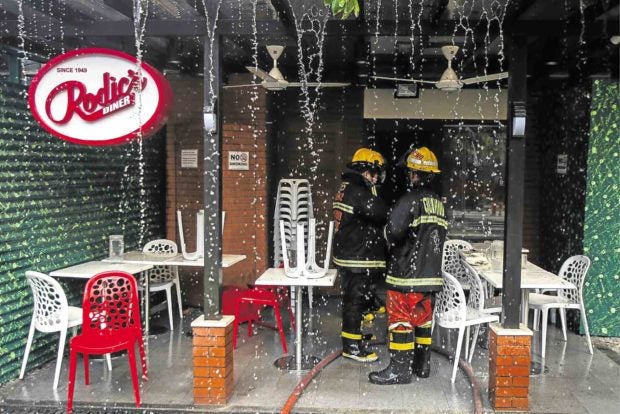 A decades-old restaurant was among the UP icons damaged by Thursday’s campus fire. —JAM STA ROSA

Enriquez said the New Era Fire Station was alerted at 7:14 a.m. to the fire, which reached the second alarm at 7:26 a.m.

No one was reported injured as most stall owners do not usually arrive for work until around 8 a.m.

The fire was put out by 8:53 a.m., at which point the building was placed on lockdown.

Concessionaires were moved to tears by their loss, unsure if they could ever recover anything useful from the debris to rebuild their livelihood.

The Shopping Center was considered the building most woven into the daily fabric of life in and outside the campus—its stalls’ low prices attracted students even from other universities.

Aida Danabar, 41, who had worked at the Blessings photocopying stall for 15 years, held back tears as she recalled how the job helped her put her son through college.

Thelma Tecson, a third-generation owner of the famous Rodic’s Diner, said the restaurant had been a campus fixture for decades. Rodic’s now has several other branches mostly in Quezon City, but the one at UP campus remains a sentimental favorite.

“This branch is like going down memory lane. We have alumni who are already directors, secretaries of departments; they come, they eat because it’s their nostalgia moment,” she told the Inquirer.

According to Tecson, SC can be considered a proud product of campus activism during the martial law years under the Marcos regime, when students “clamored” for a center where they could find affordable services. The original structure, she added, was intentionally built to look unassuming—more like a classroom than a commercial space.

UP students and alumni took to social media to share their memories of the Shopping Center—while venting their grief and frustration.

“How can UP claim it’s one of Asia’s top universities when the old iconic buildings keep burning down?” said Ifugao Rep. Teodoro Baguilat, who said he had his PE uniforms sewn there.

“UP SC will always be that expanded sari-sari store catering to the various needs of the humans of UP Diliman, where the academic and the mundane intersect,” said former Solicitor General Florin Hilbay. —WITH INQUIRER RESEARCH

TAGS: Fire, landmark, Shopping center, University of the Philippines (UP)