A year after takeover, Kadamay still not welcome in Bulacan

PANDI, BULACAN—It has been a year since the urban poor group Kalipunan ng Damayang Mahihirap (Kadamay) forcibly took houses at six resettlement sites here, but some residents still cannot accept them into their community.

On March 8 last year, about 8,000 Kadamay families and other informal settlers illegally occupied 6,000 units in housing projects of the National Housing Authority (NHA), arguing that they were homeless families who had been neglected by the government.

But Kadamay families, who occupied houses at Pandi Residence 3 and Pandi Village 2 resettlement projects here, have not been welcomed by residents at Barangay Mapulang Lupa.

“We have been wondering why President Duterte decided to give them these houses, when they made him look bad in their placards and their chants,” said Rogelio Leonardo, barangay chair.

Because of the takeover, Kadamay families have yet to be given resident certificates and barangay clearances, he said.

“We believe in what is lawful. The government should act quickly to correct this situation,” he said. “The NHA has informed us that only families in the master list of beneficiaries can be issued residence certificates. I don’t believe [Kadamay] families are even eligible to vote here.”

Some residents living near units occupied by Kadamay members said the government should not have allowed the group to squat on houses meant for other poor families.

Leonardo said Kadamay controlled the areas they had occupied. “They are organized. We cannot enter their areas. They require identification cards before they allow anyone to enter. Even the police cannot get in, we were informed,” he said.

He said the Kadamay families had their own electricity, supplied by a solar battery. “Someone provides them power and water. They appear to have financiers,” he said.

Kadamay has also disrupted life in the community. “We like our peace and quiet. But Kadamay sometimes stages rallies as early as 6 a.m., yelling and stopping traffic. It’s worse when they stage their rallies until the evening,” Leonardo said.

But Barangay Cacarong Matanda chief, Armando de Leon, said more than 800 Kadamay families, who have settled in houses intended for members of the Bureau of Fire Protection and Bureau of Jail Management and Penology in his village, had been good citizens. 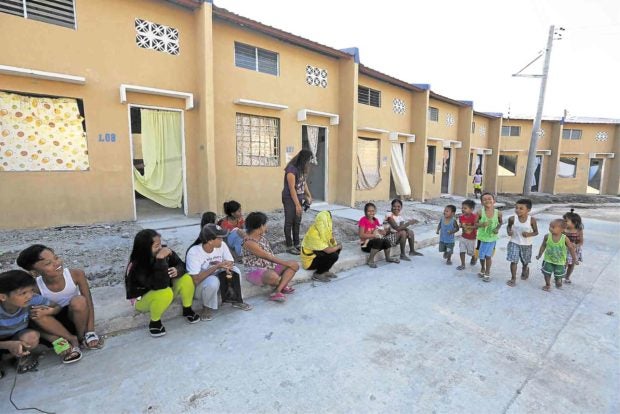 “They have coordinated with the village officials. We gave them community identification cards and clearances since they have been residing here for a year now,” he said.

Some Kadamay members have volunteered to take part in Cacarong Matanda’s peace and order programs, he added.

Sta. Ana said Kadamay families had been served by the local health centers. Their garbage is also collected by the town government.

Despite concerns over security, only a few crimes have been reported in housing sites occupied by Kadamay, according to Chief Insp. Manuel de Vera, Pandi police chief.

The police recorded two murder cases, a homicide case, two complaints of attempted homicide, a rape complaint, an attempted rape case, an illegal drugs case and the theft of a motorcycle.

The NHA said only 1,700 houses meant for policemen, soldiers, firemen and jail personnel would be allocated to Kadamay families.

“The NHA general manager [Marcelino Escalada Jr.] has made it clear from the start that other housing units [not meant for uniformed personnel] will remain [reserved] for informal settlers relocated from Metro Manila,” said Elsie Trinidad, NHA spokesperson.

Read Next
Fewer rice meals for poor as NFA supply drops in Davao provinces
EDITORS' PICK
Duterte: Authorities may take over hotels, but it’s not a ‘remedy’ in a democracy
Smart is fastest 5G Network in PH – Ookla
When will PH get enough COVID-19 vaccines? ‘I really don’t know,’ Duterte says
Duterte defends govt’s efforts vs COVID in 2020
Smart introduces Smart Barkada with the launch of Double GIGA
LT Group, Inc. Notice of Annual Shareholders’ Meeting 2/2
MOST READ
‘Duterte a total failure as leader. He must step down’ – group
Duterte ‘privately’ dealing with China invasion in West PH Sea – Palace
Ramon Tulfo says gov’t running PH like a ‘headless chicken’
Stop acting like a colonizer, PH business groups tell China
Don't miss out on the latest news and information.