IN A NUTSHELL: She says she’ s now OK with Sen. Koko Pimentel and ex-senator Alan Peter Cayetano •  She admits she makes no eye contact with Trillanes  •  She is happy with  people she’s working with at the Senate

It was Trillanes, who initiated in 2015 a Senate probe on corruption allegations against Binay’s brother, former Makati Mayor Jun-Jun Binay and their father, former Vice President Jejomar Binay.

The probe was conducted by Senate President Aquilino “Koko” Pimentel III as then chairman of the Senate blue ribbon subcommittee. 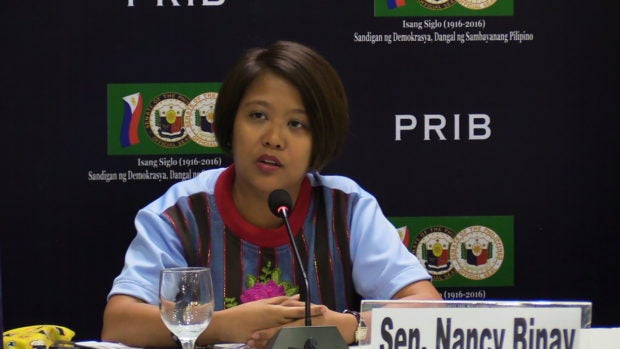 Aside from Pimentel and Trillanes, former senator and now Foreign Affairs Secretary Alan Peter Cayetano also actively participated in the probe into the allegations against the Binays.

While she did not name Trillanes, Binay responded when asked if she was affected whenever she sees him in the Senate.

Asked again how she reacts when their paths cross, she said: “Lookaway.”

Unlike her first-three years in the Senate, Senator Binay said she is happy with the people she’s working with now in the Senate.

Her father, she said, had already forgiven his accusers since he started attending a bible study after the 2016 elections.

Asked if she had also forgiven her colleagues, who hurled accusations at her family, Senator Binay said in jest: “