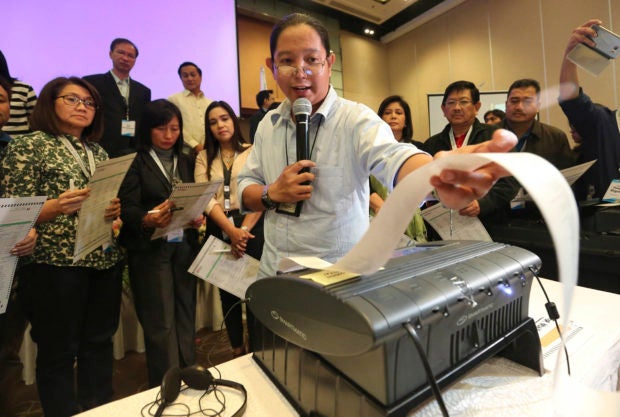 BACOLOD CITY — The Commission on Elections (Comelec) on Wednesday said it would investigate allegations of fraud and foreign interference in the May 2016 national elections.

Senate Majority Leader Vicente Sotto III divulged the alleged irregularities in a privilege speech on Tuesday and called for a Senate investigation.

Sotto asked the Senate to look into two allegations raised by his “concerned and impeccably reliable” source: the transmission of results a day before Election Day and the accessing of election servers by a foreign party.

Election Commissioner Rowena Guanzon said on Wednesday that the Comelec would not cover for employees who might be involved in the alleged irregularities.

“We want to assure the public that we do not cover for our people. It is important that we have fair, honest, credible elections,” Guanzon told reporters in Bacolod City.

“If the senators are saying there was fraud, we would like to know the details of these reports so we can take our people to task,” she said.

In a statement in Manila on Wednesday, Comelec spokesperson James Jimenez said the poll watchdog would look into the allegations and ask Sotto to share the evidence he used in his Senate presentation.

Malacañang said it was leaving the investigation to the Comelec, an independent constitutional body.

Presidential spokesperson Harry Roque said he would wait to see if President Duterte would direct other agencies to look into the allegations.

“But as of now, the law department [of the Comelec] has the exclusive jurisdiction to conduct a preliminary investigation of election offenses,” Roque said.

No effect on Duterte

He added that if the alleged fraud were proved, it wouldn’t affect Mr. Duterte because the President’s electoral victory in 2016 was not being contested.

The group Kontra Daya said that from the start it had been pointing out the vulnerability of Smartmatic’s machines.

“We have also denounced the lack of transparency, not to mention the foreign intervention that informed our national and local polls with the awarding of the contract to Smartmatic,” Kontra Daya convener Danilo Arao said.

“The bottom line is clear: We cannot afford to have an election system that is inherently vulnerable to fraud due to lack of transparency and preponderance of foreign intervention,” Arao said.

But the National Citizens’ Movement for Free Elections (Namfrel) frowned on an investigation by the Comelec, saying the probe must be conducted by “competent authorities in the proper forum.”

Without hinting at who the operators or the beneficiaries were, Sotto said the transmission of results began on May 8 and continued up to the morning of May 9, Election Day.

He said several senatorial candidates, including Panfilo Lacson and Juan Miguel Zubiri, and presidential candidate Grace Poe got zero votes in hundreds of precincts across the country.

Sotto said the operation benefited six candidates but he did not name them.

The early transmission, he said, originated from a cluster of vote-counting machines located in Libon, Albay province.

Sotto also said that the election servers were intruded into on May 8, 10 and 11 by someone using the username e360, which “looks very similar to a software product of the Philippine election provider, Smartmatic.”

The intruder, he said, “copied and submitted data to a server in the Amazon cloud services” in the United States.

As for the foreign intrusion, she said Sotto could be referring to Marlon Garcia, the Smartmatic technical support team head whom the Department of Justice (DOJ) accused of changing the script on the servers in the middle of the transmission of election results.

Guanzon said the DOJ ordered the filing of charges against Smartmatic for Garcia’s action.

“We should tell Smartmatic to produce Garcia at the DOJ because I think he is not in the country,” she said.

The Comelec has decided to buy 97,000 vote-counting machines from Smartmatic for P2.1 billion for use in the 2019 midterm elections.

Sotto said the Comelec’s decison was “problematic, given the numerous unresolved issues that Smartmatic is being accused of in the … 2016 national elections.”

In a talk with reporters on Wednesday, Jimenez said stopping the deal with Smartmatic now would be premature.

“[T]here is a process for that. We will go into that but right now, to pull the trigger, so to speak, just because two allegations were presented, which were interrelated in a particular way [that] is not the exclusive possible alternative here, then that might not be the wisest thing to do right now,” he said.