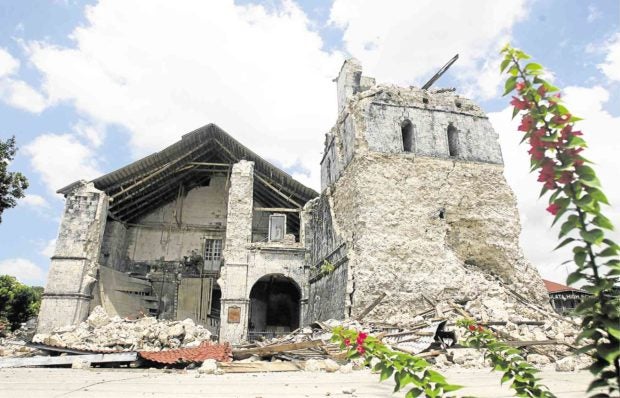 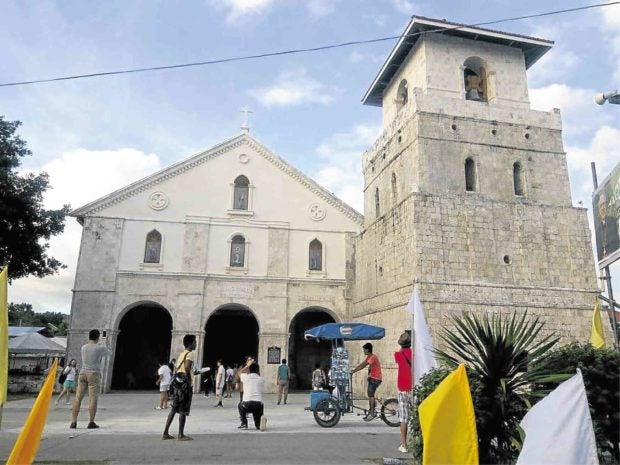 RESTORED In 2013, the Baclayon Church (top) in Bohol province is a picture of devastation that is too painful for parishioners to see. The church has been restored this year, ready to accommodate the faithful. —MARIANNE BERMUDEZ AND LEO UDTOHAN

BACLAYON, Bohol — On Feb. 27, Sylvia Fernandez-Maristela closed her bakery and asked her four employees to go on leave.

It was a special day, she told them. She was giving them the day off so they would not miss the reopening of the Our Lady of Immaculate Conception parish church.

It had been more than four years since the church — popularly known as Baclayon Church — opened its doors to parishioners after it was damaged when a 7.2-magnitude earthquake jolted Bohol province on Oct. 15, 2013.

Maristela said she and her husband Bebot and daughters, Maricel and Jade Marie, were overjoyed that they would be able to pray and attend Mass at the church again, now that it had been restored.

“My heart is extremely overjoyed because our church is back,” said the 66-year-old Maristela. “Now, we can hear once again the pealing of the bells.”

It was painful for parishioners to watch portions of the centuries-old church crumble in 2013, when Bohol was rocked by the strongest earthquake to hit the province in recent years.

The tremor left the Our Lady of Immaculate Conception parish church in disarray. Its facade and bell tower were destroyed while portions of its stone walls cracked.

In 1993, the structure was included in the United Nations Educational, Scientific and Cultural Organization’s tentative list of World Heritage in the Philippines.

The NHCP undertook the repair and restoration of the church. In the meantime, parishioners heard Mass under a temporary church built beside the church.

Dr. Rene Escalante, NHCP chair, led the ceremonies at the portico of the newly restored church which was witnessed by, among others, Cabinet Secretary Leoncio Evasco Jr., a former priest who was briefly assigned at the church during the early 1970s.

The event was followed by a reconsecration of the shrine and a Mass officiated by Apostolic Nuncio to the Philippines Archbishop Gabriele Caccia.

In his Homily, Caccia expressed his admiration to the Boholano community for their efforts in restoring the church.

“It is good when the church and the government work together. When there is harmony, there is peace and joy,” he said.

Sunday Masses are held at Baclayon Church at 5:30 a.m., 8 a.m. and 5 p.m, while Masses on Monday, Tuesday and Thursday are held at 6 a.m. Masses on Wednesday and Friday are scheduled at 5 p.m.