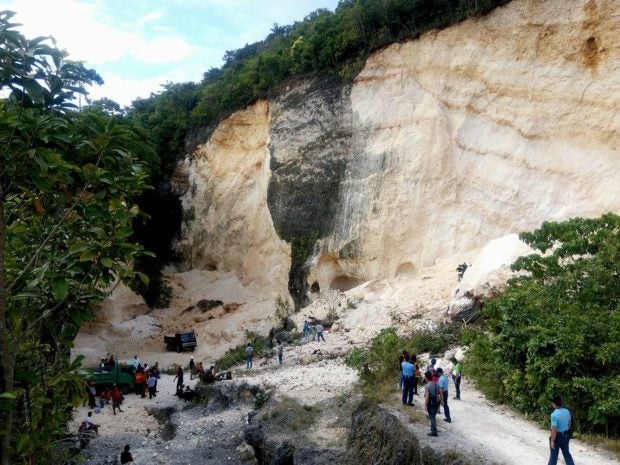 Rescuers continue to dig to find the bodies of two men who were buried during a landslide on Monday afternoon in Barangay Candabong in Anda, Bohol. LEO UDTOHAN/INQUIRER VISAYAS

TAGBILARAN CITY—Rescuers found on Wednesday the bodies of the two workers buried alive in a landslide at a quarry site at the foot of the mountain in Sitio San Isidro in Barangay Candabong in Anda town, Bohol province.

Ariel Abac was first found at 11 a.m. while Valeriano Galeyo was pulled out an hour later.

The recovery of the bodies shattered the hope of KC, Abac’s wife, of finding him alive.

She remained hopeful that Abac, 32, was still alive because his phone was still ringing when she called his mobile phone on Tuesday, more than 12 hours after the landslide occurred on Monday afternoon.

“I was still hoping that he was alive,” said KC, 25. “His three children were waiting for him.”

When he took a break and left the group, he heard a big commotion.

He said Galeya and Ariel, who were digging at that time, didn’t notice that big rocks as big as a barangay hall had rolled down toward them, followed by a mass of soil.

When the landslide hit, he added, smog and dust covered the entire place for half an hour.

Ramon, 48, said Ariel and Galeya may have been buried in a pile of soil at least 12 feet tall. A mini dump truck near the victims was completely covered.

But Ramon said that while he believed the two would not have survived the landslide, he wanted to recover the body to give them a proper burial.

Rescuers had difficulty digging due to the huge rocks.

Anthony Damalerio, head of the provincial disaster risk reduction management office (PDRMMO), said rescuers from the neighboring towns of Pilar, Alicia, Ubay, Candijay, Guindulman and Duero went to the site to help in the search and retrieval operation.

Volunteers from the Philippine Army and Philippine National Police arrived on Tuesday afternoon to help.

Rescuers had to use only shovels because the upper portion of the mountain remained unstable.

The mountain in Candabong was a known quarry site for limestone.

Totsie Escobia, provincial information officer, said the municipal government had stopped the quarry because the area is one of those identified as landslide-prone.

But he added that some residents continued to defy the order and continued to quarry for limestone for livelihood.

Escobia said the provincial government was looking into the situation, urging the local government units for strict compliance on quarry laws.