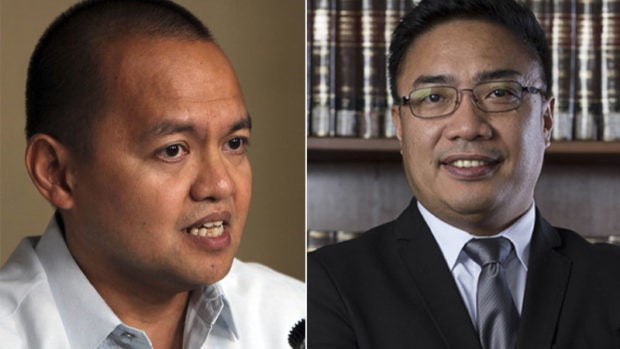 Supreme Court Associate Justice Marvic Leonen was quick on the draw and blasted a move to oust Chief Justice Maria Lourdes Sereno outside the impeachment process.

Exactly a week after joining 12 other justices who forced Sereno into taking an indefinite leave, Leonen swiftly moved on Tuesday to block an attempt by Solicitor General Jose Calida to unseat the Chief Justice by attacking the legality of her appointment.

In a news briefing, Supreme Court spokesperson Theodore Te said Leonen was the lone opponent of the decision of the other members of the high court to compel the Chief Justice to answer within 10 days the quo warranto petition against Sereno, which Calida filed on Monday.

A quo warranto petition challenges an official’s right to hold a government position.

“Leonen dissented on the ground that in his opinion, the petition should be dismissed outright,” Te told reporters.

Two court sources, who agreed to speak on condition of anonymity, said Leonen argued that Sereno, like the rest of the high court magistrates, could only be removed from office through impeachment proceedings in Congress, as spelled out in the 1987 Constitution.

“He said the justices of the Supreme Court, being impeachable officers, can be removed only through impeachment,” the first source said.

“For him, the quo warranto petition may supplant the constitutional requirements of taking out impeachable officers from authority,” the second source said.

The first source said the magistrates considered holding oral arguments to make the public understand the deliberations on Calida’s petition.

“The justices had a discussion on that issue, but they opted to tackle that after the Chief Justice has filed her comment,” the source said.

“We don’t know yet if that will happen. It’s up to the majority (of justices) to decide on that,” the source added.

In his petition, Calida said Sereno was unlawfully holding the position and that she did not prove her integrity as an applicant for the judiciary’s top post.

Calida said Sereno had failed to comply with the requirements set by the Judicial and Bar Council (JBC), including the mandatory submission of statements of assets, liabilities and net worth (SALNs).

He said Sereno filed her SALN only in 1998, 2002 and 2006 during her 20 years as a faculty member of the University of the Philippines College of Law.

The two court sources said all the 14 magistrates were present during the regular weekly full-court session.

Vice President Leni Robredo on Tuesday said Calida’s move could preempt the outcome of the impeachment proceedings already under way.

“To think of other ways to remove (Sereno) is unconstitutional,” Robredo, who is a lawyer, told reporters in Marawi City.

She cited a disbarment case filed against Chief Justice Marcelo Fernan, which was rejected by the high tribunal.

“The Supreme Court said it could not accept the case because a magistrate can only be removed through impeachment,” she said.

Robredo also said she wished the Supreme Court kept its impartiality “because it was the most important feature of our justice system.”

“Without it, who else do we trust?” she said.

The president of the Integrated Bar of the Philippines (IBP), Abdiel Dan Fajardo, also disputed Calida’s legal tack, which also did not comply with the time limitations in the filing of the petition.

“A quo warranto petition may not be a constitutionally sanctioned [method],” Fajardo told the Inquirer.

The only “constitutionally recognized move” to oust any member of the Supreme Court is through impeachment, he said.

Fajardo said questions of integrity, which Calida raised against Sereno, could not be scrutinized by the tribunal.

“Twice removed, the court in itself cannot pass judgment on [its members] on the basis of integrity because that is purely political. It’s the discretion of the appointing power, which is the President,” he explained.

“Let’s just hope that the Supreme Court will really take these matters judiciously. I’m hopeful that they will,” he said. “I hope they will exercise extreme prudence in the disposition of this petition.”

Fajardo said Calida also should have abided by the prescriptive period in challenging Sereno’s authority, citing Rule 66 of the Rules of Civil Procedures, which states that a quo warranto petition should be filed within one year after a person had assumed office.

Senate President Aquilino Pimentel III said he did not see “any legal basis [for] how you can remove an impeachable official through a nonimpeachment proceeding.”

In a radio interview on Tuesday, Pimentel also warned that claiming Sereno’s appointment was invalid was a “dangerous reasoning” that could be used against anyone holding public office.

Opposition Sen. Risa Hontiveros said Calida’s petition was an assault on the Senate’s integrity and democratic processes, and it could set a dangerous precedent to relegating the Senate to the political sidelines.

“It is part of a greater scheme to render the Senate obsolete and irrelevant, when it is one of the few institutions left where the government’s abuses can still be checked,” Hontiveros said.

Drilon said there were only three qualifications for a Chief Justice: citizenship, age and a minimum 15-year law practice. —With reports from Richel Umel and Jocelyn R. Uy