Man mauled by MMDA personnel turns out to be wanted for murder in Masbate
By: Jovic Yee - Reporter / @jovicyeeINQ
Philippine Daily Inquirer / 05:06 AM March 07, 2018 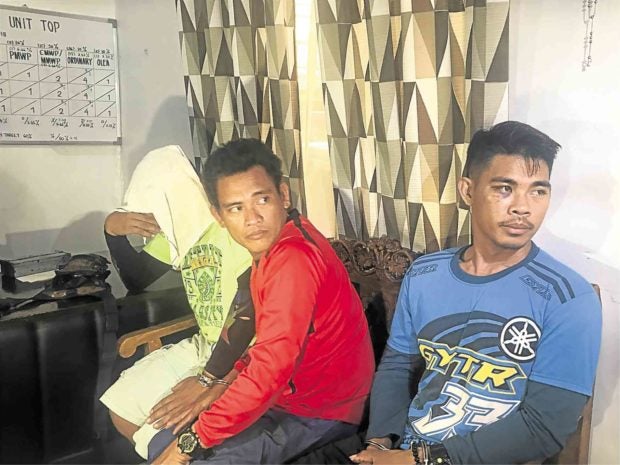 ‘BAD’ PUBLICITY Romnick Relos (right) waits with his brothers at the PNP-CIDG office in Camp Crame after their arrest in connection with a 2007 murder. Relos was spotted by authorities after a video of him being mauled by MMDA personnel went viral. —JEANNETE I. ANDRADE

The coconut vendor who earned the sympathy of netizens after he was mauled last week by Metropolitan Manila Development Authority (MMDA) personnel has turned out to be a longtime fugitive from the law.

Romnick Relos was arrested for murder on Tuesday by agents of the Philippine National Police’s (PNP) Criminal Investigation and Detection Group (CIDG) after authorities recognized him in the mugging video which became viral after it was posted online.

Hours earlier, Relos’ brothers, Dondon and Roy, were also picked up by the police in their house in Pasay City.

The three are accused of killing their neighbor, Junie Olete, in Aroroy, Masbate, province on March 25, 2007.

Based on the case information given to the MMDA, the brothers barged into Olete’s house and hacked him to death in front of his wife, Evelyn. It was unclear why they killed him.

According to Supt. Richard Verceles of the PNP-CIDG, policemen in Bicol region recognized Relos as he was being interviewed on TV and immediately relayed the information to the CIDG. Verceles said the CIDG had previously sent out tracking teams to locate the brothers and seeing Relos on TV was a stroke of luck.

The brothers were arrested based on arrest warrants issued by Judge Nilo Barsaga of the Masbate Regional Trial Court Branch 46 on Jan. 25, 2008. Barsaga did not set any bail for the suspects.

Relos was supposed to be at the MMDA yesterday to get from MMDA acting General Manager Jojo Garcia his wooden cart which had been seized by Sidewalk Clearing Operations Group (SCOG) personnel last Friday.

However, Relos failed to appear at the agency and instead went to Raffy Tulfo’s public service program at TV5. But he was arrested by the CIDG as he was about to go on air.

MMDA Chair Danilo Lim said that Relos probably chose to go to Tulfo’s show so he could get “more sympathy” from the public.

Since the video of Relos’ mauling went viral, the MMDA has been criticized by netizens for its personnel’s treatment of a vendor who was just trying to make a living.

Despite the turn of events, Lim said that this would not affect the case against the three SCOG personnel who were slapped with a 15-day preventive suspension for mauling Relos. —With a report from Jeannette I. Andrade