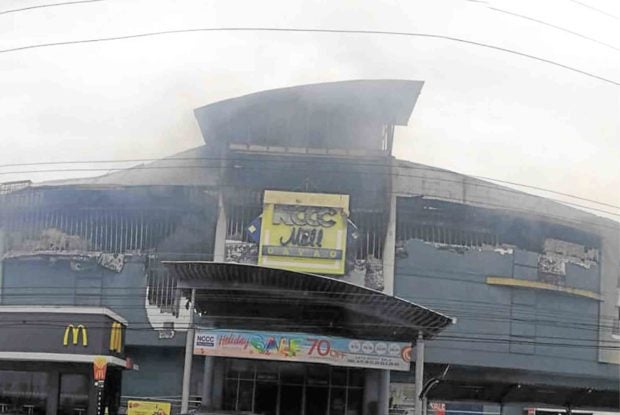 DAVAO CITY — The Interagency Anti-Arson Task Force (IATF) has recommended the filing of graft charges against city building officials, personnel of the Philippine Economic Zone Authority (Peza) and the Bureau of Fire Protection (BFP) for their alleged failure to check safety violations that could have prevented the fire that gutted NCCC Mall here in December last year.

Senior Supt. Jerry Candido, head of the IATF who conducted the probe, said IATF recommended charges against building officials who approved the renovation of the mall’s third floor, where the fire started. Thirty-eight people, 37 of them call center agents of Survey Sampling International (SSI) operating on the building’s fourth floor, died in the blaze.

He said NCCC Mall, its contractor Rockfort Construction and SSI would answer to complaints of imprudence and negligence.

Mayor Sara Duterte on Monday said she already instructed Zuleika Lopez, city administrator, to wait for the final report of the IATF and follow its recommendation.

“They have to answer to the charges and face the court,” Duterte said. “We could not do anything about it because that was the result of the investigation.”

NCCC Mall renewed its license in April 2017. SSI was last inspected in September, almost four months before the fire broke out.

Survivors earlier claimed that they had a hard time getting out of the building at the height of the fire. They said the fire alarm and sprinkler system did not work.

Candido said the certificate of fire safety inspection that the BFP office had issued to both NCCC Mall and SSI when these secured business permits last year listed no violation, “when based upon our inspection, there were really violations.”

“The building itself has fire exits … but these were not fire safety compliant,” he said.

Candido said investigators also found out that SSI’s sprinkler and alarm system was not connected to the mall. “It should have been connected into the system so that when a fire breaks out on the other floors, the SSI system would be triggered. We also found out that the NCCC fire alarms and sprinkler system was not automatic but on manual setting at that time,” he said. —REPORTS FROM ALLAN NAWAL AND FRINSTON LIM