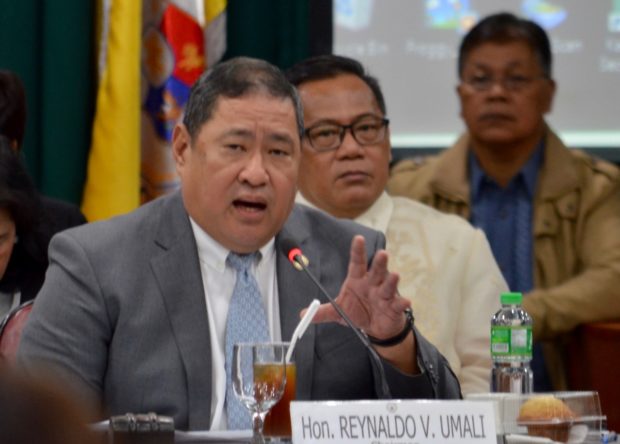 The chair of the House justice committee said on Monday that the quo warranto petition filed by the Office of the Solicitor General (OSG) against Chief Justice Maria Lourdes Sereno would not affect the impeachment proceedings against her.

A quo warranto petition questions the validity of an appointment from the start based on the official’s qualifications, while an impeachment case seeks the official’s ouster for culpable violation of the Constitution, graft and corruption, betrayal of public trust or other high crimes.

Should the high court grant the OSG petition to invalidate Sereno’s appointment, the impeachment proceedings will be rendered “functus officio,” Umali said. (Functus officio refers to the expiration of the mandate of the proceedings.)

Until that happens, he said, the quo warranto case and the impeachment proceedings in Congress “can proceed simultaneously.”

“These are separate and independent actions based on different grounds,” Umali said.

The option to oust Sereno by challenging her legitimacy picked up steam after it was disclosed in the House justice committee’s investigation last month that she had not complied with the requirement to submit statements of assets, liabilities and net worth (SALNs) covering a 10-year period to the Judicial and Bar Council (JBC) during the 2012 selection process.

Critics of the Duterte administration’s latest move against Sereno pointed out that the Constitution only requires the Chief Justice to be a natural-born Filipino citizen, who is at least 40 years old and has served as a judge or practiced law for at least 15 years.

But Umali argued that the JBC rules requiring the submission of the SALNs “form part of the law of the land … as long as it’s not unconstitutional.”

Thus, Sereno’s alleged failure to meet the requirement meant she did not qualify for the top Supreme Court post, he added.

Umali’s stance on the quo warranto option was similar to that of Speaker Pantaleon Alvarez, who suggested on Feb. 28 that the OSG study the option of seeking the invalidation of Sereno’s appointment.

Some party-list lawmakers, however, said only Congress, not the high court, could oust a sitting Chief Justice.

Ako Bicol Rep. Rodel Batocabe raised fears that Sereno’s ouster by way of disqualification by the Supreme Court could “open the floodgates for quo warranto proceedings against impeachable officials.”

This could “emasculate the power of Congress to impeach the officials who are expressly mandated by the Constitution to be impeachable,” Batocabe said.

“Why do we need to disqualify her or question the validity of her appointment? We might as well just push through with the impeachment,” Bertiz said.

Still, the three lawmakers said Sereno should make the “supreme sacrifice” of resigning to save the Supreme Court from further conflict.

Opposition lawmakers derided the OSG’s move as a sign that the Duterte administration was not confident that the Senate, acting as the impeachment court, would convict Sereno and remove her from office.

The quo warranto petition is “another offensive against the Chief Justice and the system of checks and balances in the government,” said Rep. Sarah Jane Elago.

According to Albay Rep. Edcel Lagman, the OSG chose the high court as venue to oust Sereno because it “has become a hostile forum” against her, especially after the justices reportedly forced her to go on an indefinite leave.