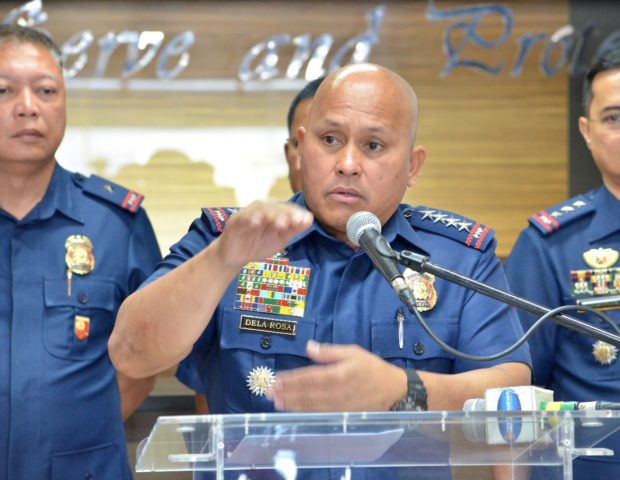 Philippine National Police Director General Ronald “Bato” dela Rosa on Monday admitted that a suspected subleader of the Islamic State-inspired Maute group was able to escape at the height of the Marawi siege last year and settle in Manila with his wife despite President Rodrigo Duterte’s declaration of martial law in Mindanao.

The Maute subleader, identified as Nasser Lomondot alias Muhamad Lomondot, and his wife, Raisalam Lomondot, were arrested on Saturday at their clothes stall in Recto, Manila, and presented to the media at a press conference in Camp Crame.

Coronel said Lomondot took part in the fighting in Marawi City and had close ties with one of the slain Maute brothers.

“He was one of the key planners of the attack in Marantao town … while the firefight was still ongoing,” Major Ronald Suscano, regional military spokesperson, told reporters.

Lomondot was able to escape the dragnet set up by security forces in November and hid in Lanao del Sur and then in Cagayan de Oro City before traveling to Manila using public utility transportation in January “to escape and avoid ongoing military operations in Mindanao,” Coronel said.

Lomondot and his wife sought refuge with their relatives in Manila, but Dela Rosa said civilian informants were also instrumental in their arrest.

Coronel said Lomondot allegedly tried to detonate a grenade while his wife created a scene in an effort to distract the arresting officers.

The couple, allegedly armed with a hand grenade and a .45-caliber handgun during the arrest, were “very uncooperative,” according to Chief Insp. Rizalino Ibay of the Manila Police District’s Intelligence and Operation Unit.

Ibay said Lomondot could not speak Tagalog, while his wife could but refused to cooperate.

“They were highly trained and well indoctrinated,” Ibay said.

The couple’s presence in Manila was first monitored in December 2017, but it was only in February that authorities were able to verify the information.

On Saturday afternoon, Ibay’s men, assisted by the Army and National Intelligence Coordinating Agency, swooped down on Lomondot after they allegedly saw him place a gun inside his bag.

A slight commotion ensued after he resisted arrest.

“But when confronted with hard facts, he started giving information,” Coronel said, adding that Lomondot would continue to undergo debriefing by authorities.

Dela Rosa said the recent arrests of suspected terrorists should not alarm the public but instead make them more vigilant, especially since authorities had determined that terrorists were recruiting new members.

He said any retaliation by the terrorist groups would unlikely be in the scale of the Marawi siege. —With a report from AFP