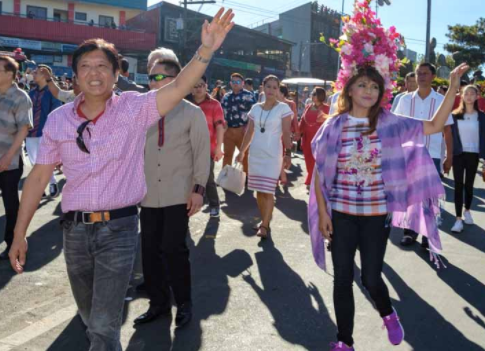 Ferdinand “Bongbong” Marcos Jr., and sister Imee Marcos, Ilocos Norte governor, appeared at the Panagbenga Festival in Baguio City on Feb. 24, an event which attracts thousands of visitors each year.

“Panangbenga” refers to the season of blossoming, hence the huge festive floats and displays of flowers that showcase the creativity of the Cordillerans.

The Marcos siblings joined the parade of the officials of Baguio, along with city mayor Mauricio Domogan. 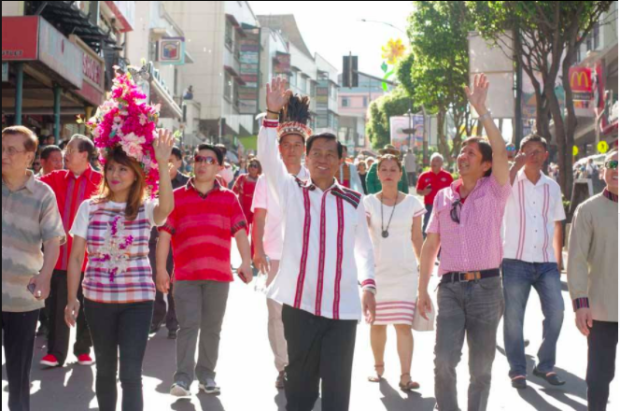 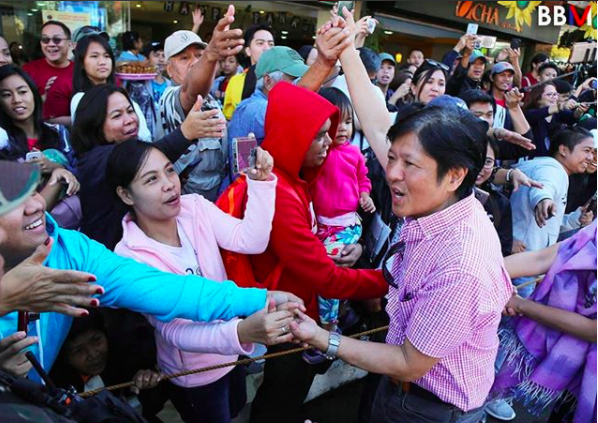 Gov. Marcos spoke at a program in Burnham Park, where she apparently introduced her brother Bongbong as the Vice President of the Philippines. She also told the crowd that the Marcos family are pondering about sending another Marcos to run for national office due to the uncertainty behind the electoral case of her brother versus Vice President Leni Robredo.

“The electoral protest filed by Bongbong has not advanced,” said the governor, as stated in an INQUIRER report last Feb. 26. “So one of his other siblings may be forced to seek national office, like me.”

During her speech at the festival, she also stated that credit should be given to her father, the late President Ferdinand Marcos Sr., who she cited as the person behind the creation of many Baguio landmarks such as the Marcos Highway, the Baguio Convention Center and Baguio Botanical Garden. 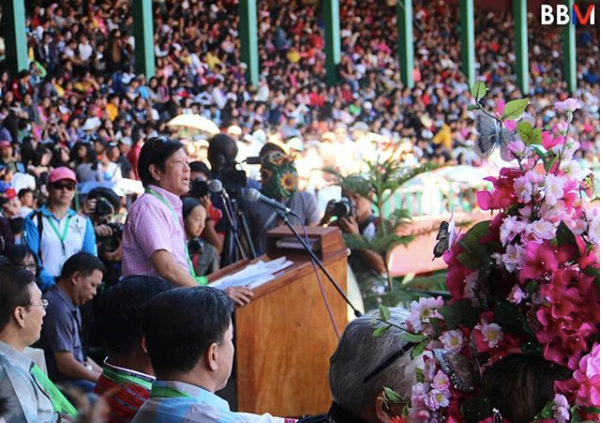 The Marcoses’ appearance in the festivities earned mixed reactions from netizens and festival-goers, particularly since it has been stated before that politicians are not allowed to campaign in the Panagbenga celebrations and during the grand parades, as made clear back in 2010 by the then-executive committee of the Baguio Flower Festival.

The statements by Gov. Marcos during the celebration did not escape the scrutiny of media-arts alliance “Let’s Organize for Democracy and Integrity” (LODI) which took to its official Facebook page in March 1 to denounce Imee and Bongbong’s attendance at the Panagbenga Festival.

“Panagbenga is not an ordinary parade. It is not a private event where organizers led by a city councilor could whimsically decide to politicize and turn into a funeral wreath festival,” it wrote. “Neither is Panagbenga a parade celebrating, forgetting, or hiding the plunder of Cordillera under the Marcos dictatorship when foreign-owned projects grabbed and violated Igorots’ ancestral domain.” 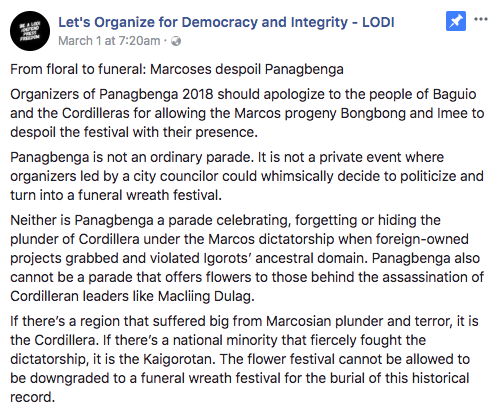 (And the Marcoses are flowering in Panagbenga? The siblings are already campaigning? Shame on you!)

Meanwhile, Segundo E. Romero, a professor-lecturer from Ateneo de Manila University, wrote in March 3, “Vintage Bongbong and Imee Marcos: So plunderful! If you can’t get lunch, get a sandwich. If you can’t steal the vice-presidency, steal the Panagbenga. “

(So it turns out Bongbong and Imee Marcos paraded at Panagbenga in Baguio. Crazy. The mayor of Baguio himself stated that they were not invited, but there you go, they still waved at people during the parade as if they were campaigning. After the parade, Imee introduced BMM as vice president of the Philippines. How about that? It’s intense politicking. The nerve.)

While some festival-goers and netizens criticized the attendance of the Marcoses in this year’s festivities, and while other reports have stated that Bongbong and Imee were actually not invited, INQUIRER.net obtained from a source a copy of a letter dated Jan. 30, 2018, from the office of Mayor Domogan. 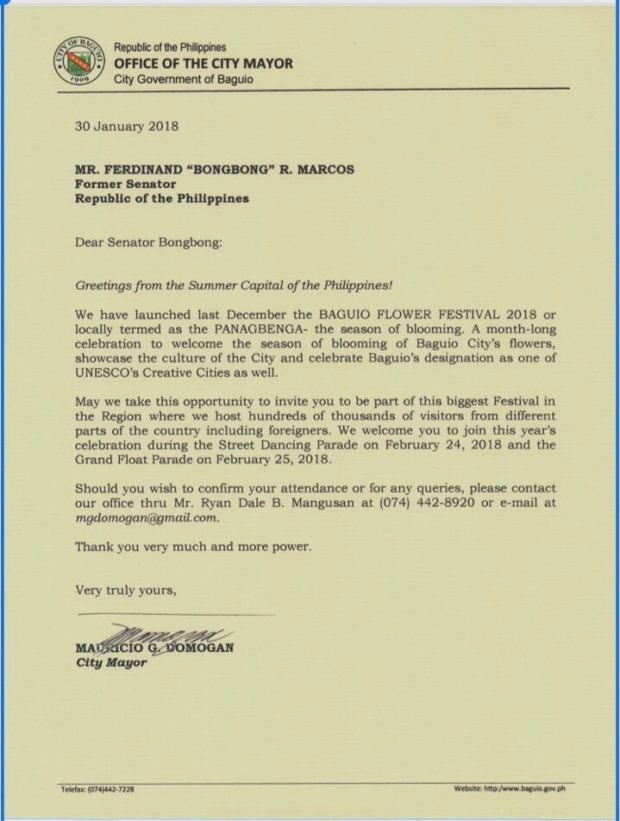 Meanwhile, in the official Ilocos Norte government page, in an article headline posted in Feb. 26, Gov. Marcos stated, “We are one family, one Solid North. Ilocos-Cordilleran tourism a synegry we should exploit,” in reference to the 2018 Panagbenga festival. JB

[Editor’s note: This article has been updated on March 7, 2018 to include details about the letter-invitation from the Office of the City Mayor of Baguio, addressed to Bongbong Marcos, dated Jan. 30, 2018.]