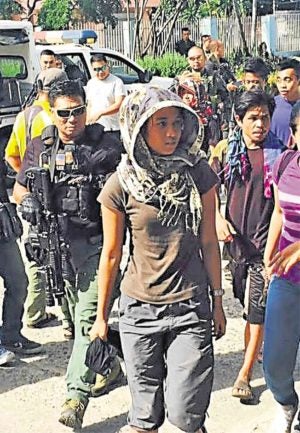 ILLEGAL POSSESSION OF FIREARMS Soldiers escort Myles Albasin, a mass communication graduate of the University of the Philippines-Cebu, and her companions to the prosecutor’s office in Dumaguete City to be charged with illegal possession of firearms. —FLORENCE BAESA/CEBU DAILY NEWS

BACOLOD CITY — Charges of illegal possession of firearms and explosives were filed against six alleged communist rebels who were captured in Mabinay town, Negros Oriental on Saturday.

The six were brought to the Hall of Justice in the capital city of Dumaguete in Negros Oriental on Sunday to undergo inquest proceedings on the complaint filed against them by the military.

The military claimed that four M-16 assault rifles, with M-203 grenade launcher and two M-4 assault rifles were seized from them when they were captured.

They were later detained at the Negros Oriental Provincial Detention and Rehabilitation Center after they refused the inquest proceedings and opted to undergo preliminary investigation.

In a radio interview, Myles Albasin, one of the arrested suspects, admitted she and her companions were in a remote community in the village of Luyang, Mabinay town, Negros Oriental to discuss poverty with farmers there.

Albasin, 21, and a native of Cagayan de Oro City, was a graduate of mass communications at the University of the Philippines-Cebu College.

The soldiers, said Banes, was met with gunfire which prompted them to fire back.

After a 45-minute clash, soldiers captured the suspects, including Albasin.

While studying in Cebu, Albasin was a member of progressive groups allied with the left.

After graduating last year, she became secretary general of the Cebu provincial chapter of Anakbayan, according to Joisa Cesista, the group’s current chair.

But Cesista said the group had not heard from her, following a meeting with lumad and Moro groups in August.

The Nagkahiusang Kusog sa Estudyante, a leftist student organization in UP Cebu, said it refused to accept the military’s “publicity stunt.”

In its Facebook page, the group said Albasin was “steadfast in the struggle of the exploited and oppressed masses.”

It said the “heightening crisis” was forcing people, especially the youth, into taking up “an advanced form of struggle.”

In rejecting peace talks with the rebels, President Duterte earlier vowed to crush the New People’s Army (NPA) and run after so-called “legal fronts” of the rebel group.
In Agusan del Norte, the military arrested a couple allegedly behind the recruitment of minors into the NPA.

1st Lt. Teresita Ingente, spokesperson of the Army’s 4th Infantry Division based in Cagayan de Oro Ciy, said Aladin Apolinaria, 49 and his wife, Luzviminda, 45, were arrested in the village of Mahayahay on Saturday.