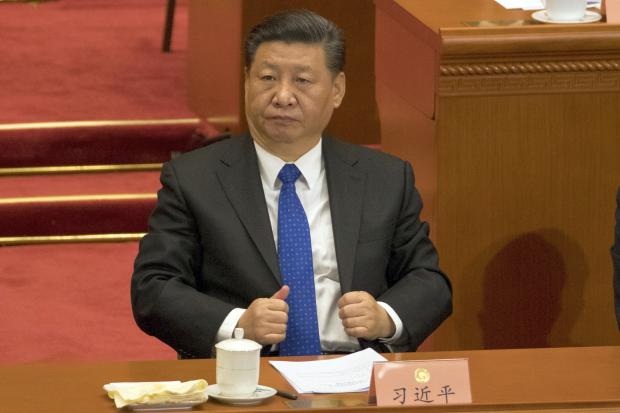 In this photo, taken Saturday, March 3, 2018, Chinese President Xi Jinping attends the opening session of the Chinese People’s Political Consultative Conference in Beijing’s Great Hall of the People. Xi is poised to make a historic power grab as China’s legislators gather from Monday and prepare to approve changes that will let him rule indefinitely and undo decades of efforts to prevent a return to crushing dictatorship. (Photo NG HAN GUAN / AP)

BEIJING — A Chinese official on Sunday defended Beijing’s plan to scrap term limits on the presidency and enable Xi Jinping to rule indefinitely as a way to ensure that three of Xi’s main leadership positions are unified.

The constitutional amendment effecting the change is aimed only at bringing the office of the president in line with rules on Xi’s other positions atop the ruling Communist Party and the military commission that controls the armed forces, Zhang Yesui, spokesman for the National People’s Congress, told reporters at a news conference.

The move is “conducive to uphold the authority of the (Communist Party) Central Committee with Xi Jinping at the core, and also the unified leadership,” Zhang said. “It will also be conducive to the state leadership system.”

This year’s gathering of the ceremonial legislature has been overshadowed by the ruling Communist Party’s surprise move to announce a plan to end two-term limits on the presidency.

That means Xi, already China’s most powerful leader in decades, could extend his rule over China for life.

While the amendment is expected to pass with near unanimous approval from the rubber-stamp body, it has aroused criticism among China’s embattled liberal activists as a reversion to the era of Mao Zedong, whose unquestioned one-man rule led China into famine, chaos and ultimately political stagnation.

The move also reverses a decades-long trend toward power sharing and institutionalization of political norms started under reformist leader Deng Xiaoping in the 1980s as a safeguard against dictatorship.

Zhang did not comment on the prospect of lifelong tenure for Xi.