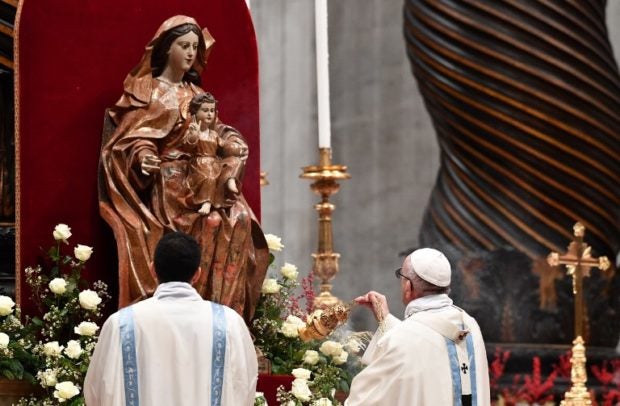 Pope Francis holds incense in front of the Virgin Mary’s statue in St. Peter’s Basilica at the Vatican on January 1, 2018, as he leads the holy mass to mark the world day of peace. AFP

VATICAN CITY — Pope Francis has made the devotion to the Virgin Mary a new fixed celebration in the Roman Catholic calendar.

The Vatican published a decree Saturday in which Francis declared that the Mary “Mother of the Church” feast would be celebrated on the Monday following Pentecost. This year, it falls on May 21.

The decree said Francis wanted the devotion to “encourage the growth of the maternal sense of the Church in the pastors, religious and faithful, as well as a growth of genuine Marian piety.”

History’s first Latin American pope is particularly devoted to Marian piety and frequently refers to the church as “mother.”

In 2016, Francis set another feast day for another key woman in Christ’s life, declaring July 22 as the feast of St. Mary Magdalene. /cbb

Read Next
Man fatally shoots self in front of White House
EDITORS' PICK
‘At peace’ with effort, EJ Obiena establishes himself among PH’s greatest ever
Aklan gov to request for ECQ if COVID-19 cases will further increase
Why REIT investment makes sense
Patients ‘almost die’ waiting for Kalibo hospital beds to free up, says mayor
The vivo V21 drops its price to equip the influencer in you
Smart reaffirms dominance as the Philippines’ fastest 5G mobile network
MOST READ
‘Hatid-sundo’ for APORs not allowed during ECQ — PNP
Pacquiao seeks PNP’s help, wants ‘forged’ PDP-Laban memo probed
Anxiety over paltry lockdown aid: ‘We will die of hunger’
Sex toys to tea: Taiwan celebrity loses China endorsements in Olympic row
Don't miss out on the latest news and information.