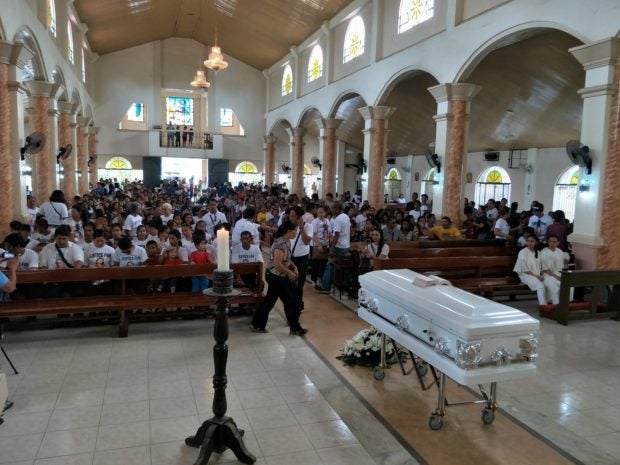 SARA, Iloilo — She’s not a family member. But Illianie Mardigal traveled more than 100 km from her hometown in Cabatuan town in Iloilo to Sara town on Saturday afternoon just to attend the funeral of Joanna Demafelis, the Filipina domestic helper whose body was kept inside the freezer in Kuwait after her employers killed her.

Mardigal said she wanted to show her support to the family because she too was a victim of abuse by her employer when she was working in Kuwait.

Unlike Demafelis, she said she was lucky enough to escape.

While she was in Kuwait, her employer didn’t feed her for days, she said. Fortunately, she was able to escape.

“I came here to show my sympathy to the family. I can feel the pain of the family. I was also a victim of abuse,” Mardigal said in Hiligaynon.

At least 2,000 people showed their support to the family as they laid Demafelis to rest at Virgin Island Cemetery in Sara.

Many of them wore a white shirt with prints in front that read: “Justice for Joanna.”

In an interview, Bello said the family could attend the hearing of the case filed against Nader Essam Assaf, a Lebanese national, and his Syrian wife, Mona, for the torture and murder of the domestic helper.

He said the family’s transportation and other expenses in Kuwait would be shouldered by the government.

Bello also said the government would fulfill its promise to redeem the land of the family, which had been pawned, one of the reasons Demafelis decided to work in Kuwait.

Cacdac then gave his contact details to these families.

The family expressed their gratitude to the government for the help it extended to them.

“The family is thankful to the President as well as all government agencies and nongovernment organizations that expressed their sympathy to Joanna,” said Pedro Demafelis, uncle of the slain domestic helper and councilor of barangay Feraris where the family comes from.

Demafelis said they had read in news reports that there might be problems extraditing the couple from the Lebanon to Kuwait due to some laws.

But he said their wish remained that the suspects be prosecuted and punished, whether the case would be tried in Kuwait, where the crime happened, or in Lebanon where the couple were arrested.

If possible, he added the capital punishment be handed on the couple because “buhay ang kinuha nila, dapat buhay din ang kabayaran (they took a life so they should also pay it with their lives).”

The remains of Demafelis were brought to the St. John the Baptist Parish Church in Sara about 1 p.m. on Saturday for a Requiem Mass officiated by retired Iloilo Archbishop Angel Lagdameo.

After the Mass, she was brought to the cemetery where she was buried.

Some of Demafelis’ classmates could not hold back their tears during the funeral.

“Joanna loves her family so much. When we were in high school, she would always tell us of her plan to go abroad someday to help her family,” one classmate said.

But she was killed while trying to achieve her dreams to make a better life for her loved ones. –With reports from Connie Fernandez-Brojan, Inquirer Visayas