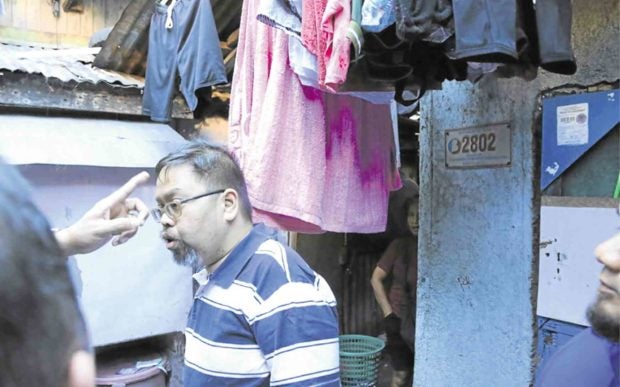 ‘I FOUND IT’ The Commission on Elections spokesperson, James Jimenez, finds a row of houses on 2802 Taft Avenue, Pasay City, right behind the Edsa LRT station, the same address given by so-called “flying voters.” —PHOTO FROM JAMES JIMENEZ’S BLOG

Could there really be voters living at a Light Rail Transit (LRT) station in Pasay City?

Commission on Elections (Comelec) spokesperson, James Jimenez, decided to check it out himself, only to find out that allegations about “flying voters” using an LRT station as an address might not be entirely accurate.

On his blog, Jimenez detailed how he went to the address—2802 Taft Avenue, which is the Edsa LRT station—on Thursday to “find the roost” of the so-called flying voters.

“It wasn’t long before I did find it, and well, it wasn’t attached to a train station. Suddenly, the story I had seen on television, didn’t seem to wash anymore,” he said on his blog, www.jamesjimenez.com.

The poll spokesperson said his curiosity was piqued by the claim that 275 “flying voters” had used the LRT station as their address in signing up as voters in Pasay City.

This stemmed from a complaint filed by a businesswoman, Yok Tin So, who claimed that 1,458 individuals committed election offenses, as they were “flying voters” who used nonexistent addresses.

Among those charged were 275 alleged registered voters, who used an address, which turned out to be the Edsa LRT station in Pasay City.

Jimenez said it was his responsibility to find out for himself so he went to the area on Thursday afternoon and what he found “made a profound difference.”

He discovered that the address, 2802 Taft Avenue, Pasay City, was along a street right behind the LRT station.

“With the insight gained from actually going to the site, I see no reason to blindly accept, lock, stock, and barrel, the complainant’s version of events,” he said.

He said the claims of the complainant must be evaluated “in light of the lived-in community” that he saw.

He noted that there was a possibility of a legal issue about the property ownership of the concerned party, leading to multiple parties laying claim to it.

While the Edsa LRT station may claim the address via a declaration of real property, the residents may also claim it by virtue of barangay-issued plates indicating the existence of subdivisions.

“But it also seems fairly obvious that there is a good probability that those who registered as voters might not have claimed ‘2802’ entirely in bad faith,” Jimenez said.