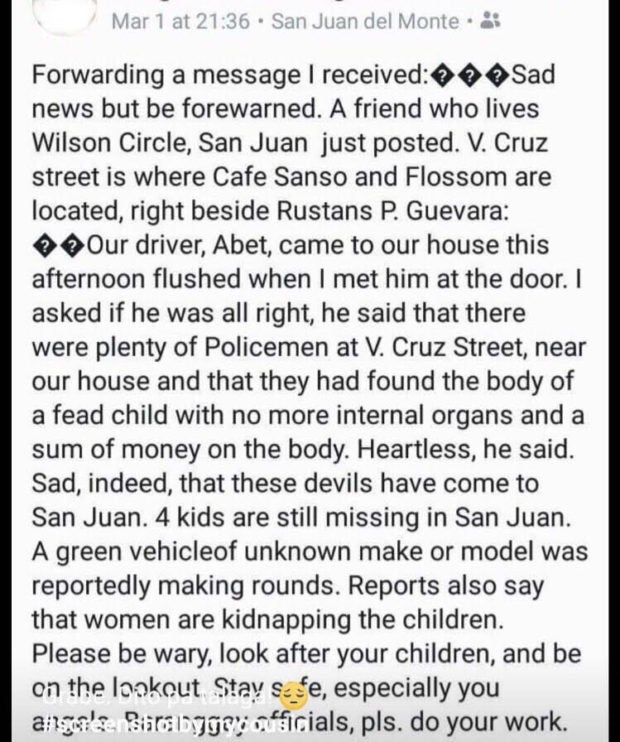 San Juan City Mayor Guia Gomez on Friday warned the public on false information spreading on social media about a child who was found dead with all its internal organs removed.

In a Facebook post, Gomez said that stories on the Internet about a dead child on Vito Cruz, Barangay Sta. Lucia were untrue.

According to a chain message post, policemen were swarming V. Cruz Street near Café Sanso Museum and Flossom Kitchen Café after “a dead child with no more internal organs and a sum of money on the body” was found.

“Sad, indeed, that these devils have come to San Juan. Four kids are still missing in San Juan. A green vehicle of unknown make or model was reportedly making rounds. Reports also say that women are kidnapping the children,” the post read.

But in a police report released Friday, the rumor was proven to be false. Senior Supt. Bersaluna, chief of the San Juan Police and Barangay Sta. Lucia chairman Eustaquio Belches Jr. inspected the area.

“According to SG (security guard) Adolfo Manzo of Café Sanso Museum and Ms. Carla Colarina, staff of Flossom Kitchen Café, that there is no incident of abduction of children that happened in their area,” the police report disclosed.

“Furthermore, the Brgy. Sta. Lucia issued a certification dated March 2, 2018 and signed by Hon. Eustaquio V. Belches Jr., Barangay Chairman, that there was no case of abduction of children in barangay Sta. Lucia on March 1, 2018 and confirms that the news about kidnapping has no evidence therefore declared as false alarm,” it added.

Gomez also urged the public to cooperate with the police’s “Oplan Bandillo,” or the city-wide anti-crime campaign which is focused on information dissemination.