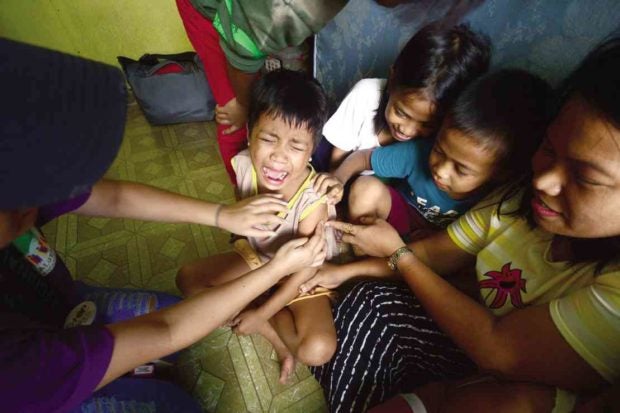 (FILE PHOTO) After overcoming the reluctance of some parents to have their children vaccinated against measles in the wake of the Dengvaxia scandal, Davao City health workers were finally able to administer the antimeasles shots with the help of other children amused at the hysterical reaction of some of their playmates. —ARJOY M. CENIZA

ZAMBOANGA CITY–The number of children who died from measles and its complications here rose to three with two more deaths reported in Barangay Tumaga.

Tumaga barangay captain Jacky Lim told the Inquirer, that the two children from her village died last week while being treated for measles and its complications.

She identified the fatalities by their first names only as 2-year-old Sheila May and 3-month-old Rico Jr.

“These deaths were reported to us recently but the deaths occurred last week yet,” Lim said,
adding that the two children were brought to the government-run Zamboanga City Medical Center.

She said the children got seriously sick on February 15 and died two days later.

“They were already buried and we were notified of their deaths,” Lim added.

On February 6, a 6-month-old boy died of heart ailment he developed after contracting the deadly but preventable viral infection in Barangay Calarian.

Asked to comment on the three deaths, assistant city health officer Dr. Kibtiya Uddin said they could only confirm two—one from Calarian and another from Tumaga.

Uddin said the Tumaga victim, a three-month old baby boy, died of pneumonia brought about by the measles virus.

A measles outbreak was declared in the city on February 9 after officials found out that there had been an increase in the number of infected persons.

Uddin said the number of measles cases reached 185 cases between January to February.

Of the 185 cases, 99 were males. The most affected age group was under five, with 133 cases reported.

Uddin said the village of Sangali had the most number of cases at 30, followed by Calarian with 15; while Mercedes, Arena Blanco and Santa Catalina had 9 cases each. The rest of the city’s barangays registered cases between 1 to 5.

Lim said their health teams were aggressively working alongside city health officials to convince parents to have their children vaccinated.

“It is so difficult to convince these people. The reason–fear of Dengvaxia. We keep on going back to their houses until they agree,” Lim said.