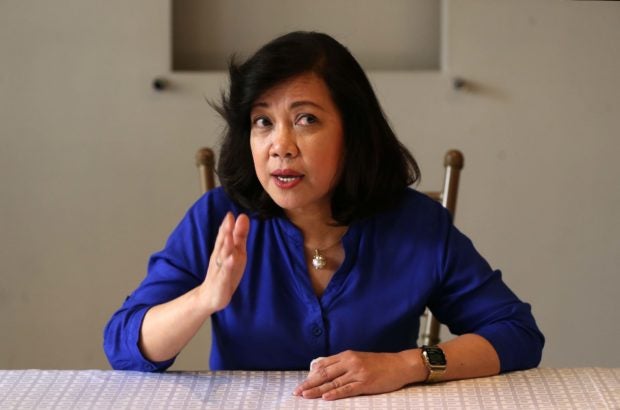 Several justices felt “deceived” by Chief Justice Maria Lourdes Sereno after she opted to take a two-week break instead of an indefinite leave she had informed them during their regular full-court session on Tuesday, three court sources told the Inquirer on Wednesday.

The insiders, who asked that their identities be withheld for lack of authority to speak with the media, noted that while the letter that Sereno sent on Feb. 27 to the deputy clerk of court, Anna-li Gombio, mentioned that she would go on an “indefinite leave,” the Chief Justice set the period of her furlough from March 1 to 15.

“For most of the justices, what Sereno did was deception. They were made to believe that she would take an indefinite leave of absence, but she actually took a wellness leave,” the first source said.

The source said most of the magistrates agreed to release a joint statement on Thursday questioning the Chief Justice’s “scheming action” and to discuss the matter in a full-court session on March 6.

“The justices said they were fooled by Sereno that’s why they want to take up the matter in their next weekly full court session,” the source added.

The second source said: “Sereno told the magistrates, ‘OK. I will take an indefinite leave.’ But now it looks like she’s just taking a wellness leave. Some of the justices are really mad.”

Sereno, the first source claimed, agreed to temporarily relinquish her post until the Senate, acting as an impeachment court, has handed up a verdict on the impeachment complaint filed by lawyer Lorenzo Gadon, a staunch supporter of President Duterte.

Dominated by the President’s political allies, the justice committee of the House of Representatives is expected to impeach the Chief Justice next week and immediately transmit the articles of impeachment to the Senate to pave the way for a trial.

“That was made clear to the justices,” the source said. “Sereno’s indefinite leave was not intended just to allow her to prepare for her impeachment trial, but to save the institution from further humiliation.”

The first source also claimed that unlike the usual process of filing an official leave, the Chief Justice did not furnish her fellow magistrates a copy of her letter to Gombio.

“The magistrates thought that was intentional because Sereno knows that her colleagues would immediately question the period she set for her leave when she just told them that her leave of absence was indefinite,” the source said.

The second source, however, said there was actually no clear agreement among the justices if Sereno’s indefinite furlough should last until the Senate impeachment court concluded the trial.

As the second most senior magistrate, Carpio will be the acting chief justice while Sereno is on leave.

The source said both Carpio and Velasco told Sereno that taking a leave would be best for her since she would be busy preparing for her defense in her looming trial in the Senate.

“It’s for your own good because you have to prepare for your defense in the Senate. That will take time. It’s also good because anybody who wants or does not want to testify against you will not be intimated,” the second source quoted Carpio as telling Sereno.

Facing her hostile colleagues, the first source said Sereno was “calm, relaxed and composed” throughout the two-hour deliberations.

“But the justices knew it was not the real Chief Justice Sereno. It was just the other face of the coin,” the source said.

The court insiders said it was Martires, Mr. Duterte’s first appointee to the tribunal, who moved for the Chief Justice to temporarily vacate her office after confronting Sereno about her supposed failure to submit her statements of assets, liabilities and net worth (SALN) before she was designated head of the judiciary in 2011.

“What triggered this question was the Feb. 12 proceedings in the House where I heard [testimonies] that you were not able to submit your SALNs. So I would like to be enlightened. Did you really comply with the requirements of the JBC (Judicial and Bar Council)?” the first source recalled Martires asking Sereno.

To which Sereno supposedly replied, “Justice Sam, your mind is being poisoned. You sound like the complainant.”

When other magistrates, including Associate Justice Marvic Leonen, raised the same question, the second source said Sereno parried them by saying, “I will answer that before the Senate during the impeachment trial.”

An irate Martires then dared the Chief Justice to just quit her post if she continued to evade answering her colleagues’ queries about her SALNs, according to the second source.

The former Sandiganbayan justice also threatened not to attend the weekly full-court deliberations and to publicly call for her resignation.

“If you want, we can resign together. Let’s do it today, not tomorrow,” the third source quoted Martires as telling Sereno in a firm voice. “I can go to the media and demand in public your resignation. Don’t force me to do that.”

“The questions over Sereno’s SALNs and her uniform reply — that she would rather answer them in the Senate impeachment trial — went on and on a number of times until Sereno ordered a recess to seek the advice of Carpio and Velasco,” the source added.