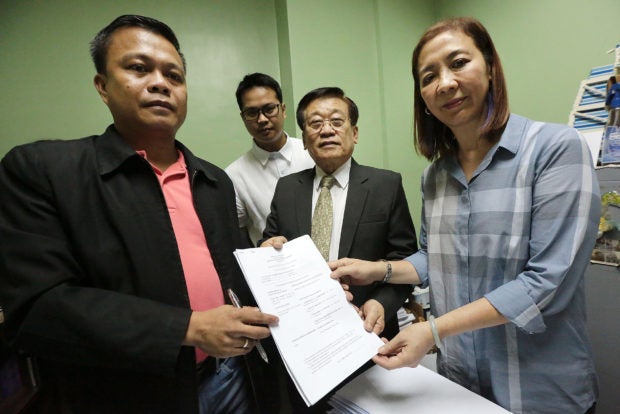 At least 1,458 people registered as voters in Pasay City gave fictitious addresses, according to a complaint that sought an explanation from the Commission on Elections (Comelec) and warned that such fabrications could be happening nationwide.

Of these so-called “flying voters,” 275 listed their address as 2802 Taft Avenue, which is actually a station of the Light Rail Transit, while 260 voters said they lived at 2713 Zamora Street, Barangay 97, which turned out to be the address of the incumbent village chair.

The other addresses given were either nonexistent or were homes and buildings too small to accommodate the number of voters who claimed to live there. A total of 330 voters, for example, said they lived at a small apartment on Zamora Street, the complaint said.

The complaint was filed in the city prosecutor’s office on Wednesday by Yok Tin So, a proprietress of a local market who is planning to run for Barangay 97 chair. She was represented by high-profile election lawyer Romulo Macalintal, whose clients include Vice President Leni Robredo.

In an interview, So said she and other witnesses were surprised by the large influx of voters in April last year despite Barangay 97 having no high- rise condominiums.

Macalintal said it was the first criminal case to be filed against such a large concentration of flying voters.

“The first remedy here is to ask for the annulment of the list of voters. But if you annul the list, it will take a long time; and even so, you don’t get to those people who are responsible,” the lawyer told the Inquirer. “So the best remedy is to file a criminal case because they will realize that what they’re doing is risky.”

Macalintal called on the Comelec and Congress to conduct an inquiry into the matter, saying the integrity of the electoral process is at stake. “If it happened in one barangay in Pasay, it can happen in other barangays.”

The city prosecutor’s office is expected to  subpoena all 1,458 alleged flying voters listed as respondents in the complaint, which accused them of violating the Omibus Election Code by making false statements, an offense punishable with one to six years in prison.

The local election officer may also be subpoenaed since such “serious anomalies” indicated that “something was very wrong with their procedures,” Macalintal said, adding that the case should serve as a “wake-up call” for the Comelec.

Reached for comment, Ramon Rosello, an election officer at Pasay’s Comelec office, said the large volume of applicants makes it difficult for Comelec personnel to ensure a complete vetting of every voter.

“Usually, if we see that the applicant’s listed address is within the precinct map, we give them the benefit of the doubt,” Rosello said in an interview on Wednesday.

But Macalintal said the election officer would have “a lot of explaining to do why such persons were allowed to register under suspicious circumstances.”

Read Next
Fewer MMDA traffic aides due to ‘purge’ vs corrupt
EDITORS' PICK
Pharmally’s Mago no longer in her condo unit — Gordon
294 areas in NCR under granular lockdown — PNP
Gordon to Pharmally’s Mago: Show up or be a fugitive
Smart reaffirms 5G leadership as PH’s most reliable 5G mobile operator
4 essentials for overcoming data protection challenges in the New Normal
Huawei’s relentless mission to bring ultimate health and wellness tracking for your fitness goals
MOST READ
Pharmally’s Mago no longer in her condo unit — Gordon
‘If it goes to Malacañang, so be it’: Lacson vows to follow evidence in Pharmally probe
Guimbal, Iloilo Mayor Oscar Garin passes away
Drilon questions legality of PCOO’s social media office
Don't miss out on the latest news and information.