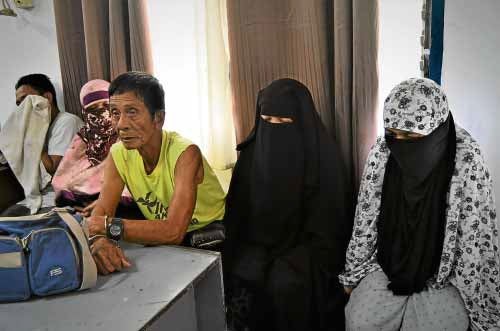 CAGAYAN DE ORO CITY — The arrest on Sunday of the wife of slain international terrorist Zulkifli Bin Hir, or Marwan, has weakened the Southeast Asian terror group Jemaah Islamiyah (JI), according to the Northern Mindanao police.

Police, however, were still on high alert for retaliatory attacks by JI and other terror groups, according to Supt. Lemuel Gonda, Northern Mindanao police spokesperson.

Gonda said police were not taking chances since remnants of JI in the Philippines, who have also pledged allegiance to Islamic State (IS), appeared to be regrouping after the loss of key leaders and the arrest of Juromee Dongon, wife of Marwan, who was killed in a police operation that also resulted in the massacre of 44 elite police officers in Mamasapano town, Maguindanao province.

Dongon and four other terror suspects were arrested in separate raids in Tubod and Baroy towns in Lanao del Norte province on Sunday.

The arrests, plus the death of Marwan, dealt a severe blow on JI, Gonda said.

He described Dongon, who was also formerly married to Abu Sayyaf leader Khadaffy Janjalani, as a “high-profile” JI member who played a key role in the terror group’s operations even after Marwan’s death.

Dongon, according to Gonda, gave JI “all forms of support, from access to financial sources to networking with associates and other terror groups.”

Gonda, however, said JI was still a major concern of police. JI, he said, was “evolving.” “They are getting in touch with other groups,” Gonda said.

Capt. Jo-ann Petinglay, spokesperson of the Western Mindanao Command based in Zamboanga City, said the military had monitored several trips by Dongon to Marawi City shortly before IS followers tried to set up a base there.

Dongon, according to Petinglay, was familiar with Marawi because she studied at Mindanao State University.

Dongon was also “verified” to be the secretary general and finance officer of “a local JI group,” Petinglay said. —Jigger Jerusalem and Divina Suson