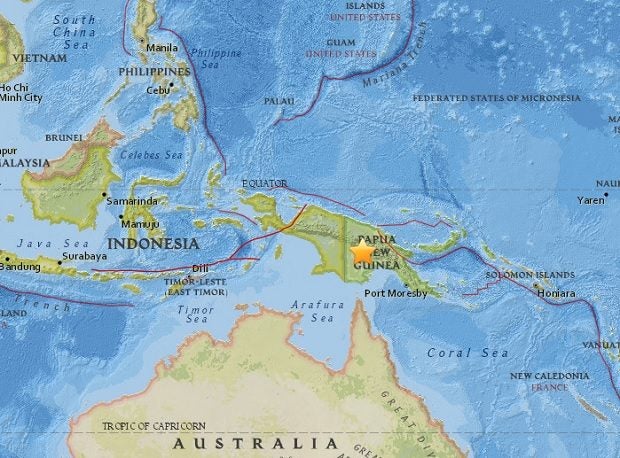 A star points to the epicenter of the magnitude 7.5 earthquake that hit Papua New Guinea early Monday, Feb. 26, 2018. USGS PHOTO

SYDNEY, Australia — More than 30 people are believed to have died after a powerful earthquake struck Papua New Guinea’s mountainous interior, a report said Tuesday as rescue teams worked to reach the worst-hit areas.

Phone lines have been largely cut, but the PNG Post Courier newspaper cited Hela provincial administrator William Bando as saying there were casualties.

It reported that at least 13 died in the Southern Highlands capital Mendi while 18 others were believed to have been killed in nearby Kutubu and Bosave.

Some 300 people were injured, it added, and properties destroyed, with reports of landslides and sinkholes.

AFP was unable to confirm the death toll.

A government assessment team was due to fly into to the area Tuesday to get a better idea of the impact, with the military mobilized to help restore services and infrastructure, the government’s Chief Secretary Isaac Lupari said in a statement.

“Information will be provided as this is made available from assessment teams in the area,” he added.

The region is home to oil and gas production. ExxonMobil PNG said buildings at its Hides Gas Conditioning Plant were damaged but all its staff were “safe and accounted for”, with non-essential employees to be evacuated.

Australian resources company Oil Search on Monday said its operations in the area were being shut down as a precaution and for damage assessment, and there were no injuries reported among its staff so far.

Earthquakes are common in PNG, which sits on the so-called Pacific Ring of Fire, a hotspot for seismic activity. /cbb