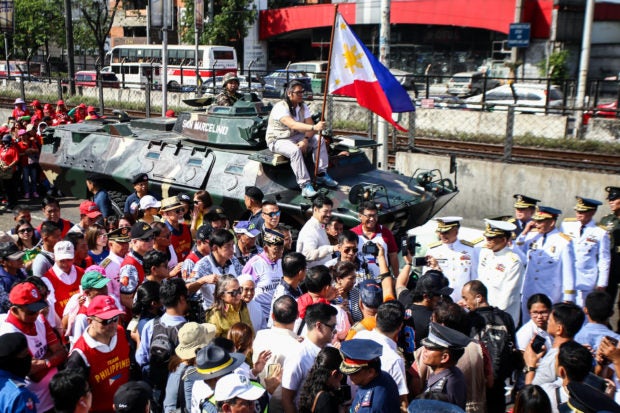 EDSA CELEBRATION Thousands of people gather at the People Power Monument to commemorate the 32nd anniversary of the Edsa Revolution on Sunday. —JAM STA. ROSA

Was the 1986 Edsa People Power Revolt the product of fake news?

Assistant Presidential Communications Secretary Mocha Uson had the audacity to ask her followers on social media this question on Sunday.

Recognizing the Edsa Revolution, President Duterte called it the “symbol of our determination to fight for what is right.” A law even declared its anniversary a holiday and created a commission to propagate its spirit.

Posted at 2:24 a.m. on Feb. 25 — the 32nd anniversary of the uprising that was hailed worldwide for its peaceful nature — Uson’s poll quickly drew a pushback from netizens, including Jover Laurio’s Pinoy Ako Blog, and from Malacañang.

Presidential spokesperson Harry Roque said the Edsa Revolution was “not fake news,” noting that it remains a milestone in Philippine history that Malacañang recognizes.

“Well, according to the law, it is not fake news. According to the law, we honor the Edsa Revolution having declared it a public holiday. And of course as I said earlier, we appropriated funds to commemorate the event,” Roque told reporters in a press briefing.

One of Laurio’s proofs to debunk Uson’s claims about the Edsa uprising is a Facebook post from a certain Jules Guiang, who says he works at PTV 4, which is under the Presidential Communications Operations Office (PCOO).

“Were you informed that President Rodrigo Roa Duterte, your principal, has released a statement calling for UNITY for today’s commemoration of the Edsa People Power (Revolt)? Yet here you are trying to divide the people.

“What fake news? ALL OF US BENEFITED (from) the fruits of Edsa! Very shameful. Please stop using your mandate and influence to divide the people.

“And yes, this is coming from your fellow public servant from PCOO thru PTV 4.”

Uson has been criticized for accepting her PCOO appointment with a monthly salary of P106,454.

Before her appointment as assistant secretary, Uson was the leader of the dance group Mocha Girls. She earned a reputation for posting sex instruction videos on Facebook. —Reports from Pocholo Concepcion and Leila B. Salaverria