FBI warned about Florida shooter but failed to act 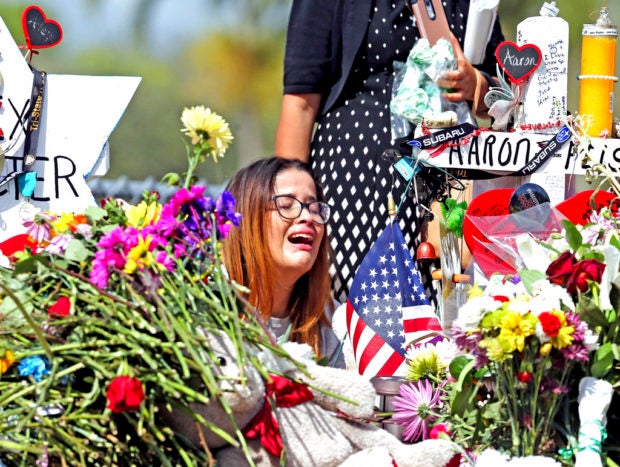 Marjory Stoneman Douglas High School former student Ariana Gonzalez weeps at a cross of slain Marjory Stoneman Douglas coach Aaron Feis, on a hill honoring those killed, Friday, Feb. 23, 2018, in Parkland, Florida. Teachers and staff returned to the school, to begin to organize and prepare to welcome students next week. Over a dozen students and teachers were killed on Valentine’s Day in a mass shooting at the high school. AP

WASHINGTON, United States — A woman close to the man charged with killing 17 people at a Florida high school warned the FBI in chilling detail that he had a growing collection of guns and a temper so uncontrollable she worried about him “getting into a school and just shooting the place up.”

The Associated Press on Friday obtained a transcript of the Jan. 5 tip to the FBI’s call center. The FBI acknowledged it failed to investigate the tip about 19-year-old Nikolas Cruz, but the transcript provides the fullest glimpse yet into the seriousness of the woman’s concerns.

“I know he’s going to explode,” she told the call-taker.

The FBI briefed congressional staff Friday about its failure to act on the alarming tip, as well as why it did not delve into a September 2017 YouTube comment posted by a “Nikolas Cruz” that said, “Im going to be a professional school shooter.” The FBI linked the January call to the report of the YouTube comment, but an FBI intake specialist and a supervisor at the call center took no further action, Senate Judiciary Committee Chairman Chuck Grassley’s office said Friday.

The tips were among a series of what authorities now describe as the clearest missed warning signs that Cruz, who had a history of disturbing behavior, posed a serious threat. The FBI declined to comment on the transcript, which was first reported by The Wall Street Journal.

During the phone call, which spanned more than 13 minutes, the woman described a teenager prone to anger with the “mental capacity of a 12 to 14 year old” that deteriorated after his mother died last year. She pointed the FBI to several Instagram accounts where Cruz had posted photos of sliced-up animals and rifles and ammunition he apparently purchased with money from his mother’s life insurance policy.

“It’s alarming to see these pictures and know what he is capable of doing and what could happen,” the caller said. “He’s thrown out of all these schools because he would pick up a chair and just throw it at somebody, a teacher or a student, because he didn’t like the way they were talking to him.”

The woman said she called the local police in Parkland, Florida, after Cruz began posting online that he wanted to kill himself. Then, she said, the threat changed to “I want to kill people.” She said he had killed animals and once held his mother at rifle-point.

“I just want to, you know, get it off my chest in case something does happen,” the woman said. “And I do believe something’s going to happen.”

The revelation of the FBI’s failure to refer the tip to agents in the field who could have investigated comes as the agency is already facing intense political pressure. Lawmakers, including Grassley, immediately sought more information from FBI Director Chris Wray on what went wrong.

As for the YouTube post, Grassley’s office said the FBI opened a counterterrorism lead but closed it less than a month later because agents were unable to identify the person behind it. Google told congressional staff it could have helped, if the FBI had asked last year. /cbb