Manila Archbishop Luis Antonio Tagle emphasized on Saturday that life was a gift from God as he appealed to the Catholic faithful to value the lives of their enemies and even society’s so-called outcasts.

Around 2,000 Catholics marched solemnly at Quirino Grandstand in Rizal Park to protest against moves to legalize divorce and change the 1987 Constitution, as well as the Duterte administration’s bloody war on drugs.

In his homily during the “Walk for Life” prayer rally, an event replicated across the country, including the major cities of Cebu, Davao and Cagayan de Oro, the prelate said Filipinos should value life even if it had gone astray.

“Let us bring back the belief that the life of other people, even of our enemies, is a gift from God. That we can pray for them and love them even if we don’t really like them,” he said. 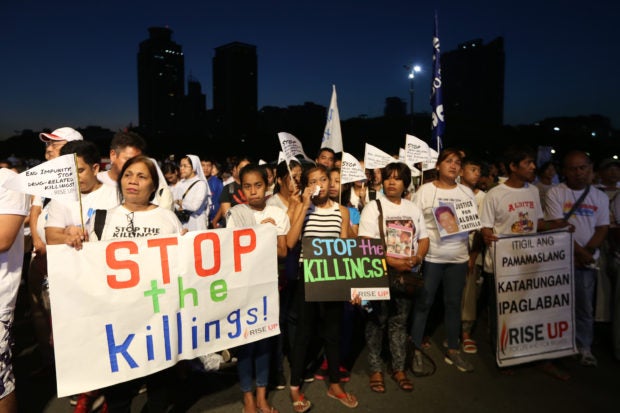 EJK KIN Families of those killed in the government’s bloody war on drugs call for an end to the
killings during the “Walk for Life” rally. NIÑO JESUS ORBETA/PHILIPPINE DAILY INQUIRER

Police said the predawn event attracted about 2,000 people, many of them carrying banners condemning the alleged extrajudicial killings (EJKs) in the war on drugs.

Without referring to the thousands of drug users and pushers who have died at the hands of the police and vigilantes, Tagle said every life was sacred.

The “dignity of life is the first casualty” when people start to think of other people in terms of their worth or usefulness, according to the cardinal, who was the main celebrant of the Mass that highlighted the four-hour prayer rally.

“Life is a gift from God. But when we start thinking of other people’s lives in terms of their usefulness to us, it becomes so easy for us to just do away and discard life,” he said.

Participants carried banners and placards with the message “Protect and Defend the Sanctity of Life and Marriage,” “End Impunity,” and “Stop the Killings.”

Priests, nuns, youths and members of lay organizations prayed the rosary and sang hymns as Tagle and other prelates read sermons against what they said were “not prolife” policies of President Duterte.

The cardinal said “it was easy to walk for one’s loved ones, but quite difficult to do the same for one’s enemies.”

He explained that when one became materialistic in his or her beliefs, it became easier for the person to write off the life of others as “less important and easy to discard.”

Pabillo reiterated concerns that moves to amend the Charter to pave the way for a federal form of government was too hasty.

“They are speeding it up, we can see that they are after the prolonged stay of those in power,” said Pabillo, chairperson of the Catholic Bishops’ Conference of the Philippines’ Commission on the Laity.

Palma reminded the people about the sanctity of life, marriage and family. He said that though the Catholic Church supported Mr. Duterte’s campaign to rid the country of illegal drugs, it was concerned about the way it was being carried out.

“We question the manner. It is done because of questionable motives and circumstances. This may not be the will of God for them,” he said.

Echoing Tagle, Palma said “no man has the right” to end another man’s life. “God is the beginning and end of life. Let us protect life from womb to tomb,” he said.

In Cagayan de Oro City, hundreds of people joined the Walk for Life to send a message to the government that the Catholic flock wanted to uphold human dignity and oppose EJKs.

“The Walk for Life is a message that the Church is not blind and deaf to its mandate to stir the moral consciousness of the people. This is our manifestation that we are against these issues, which are trampling on human rights,” said Carl Cabaraban, coordinator for the Social Action Center of the Archdiocese of Cagayan de Oro.