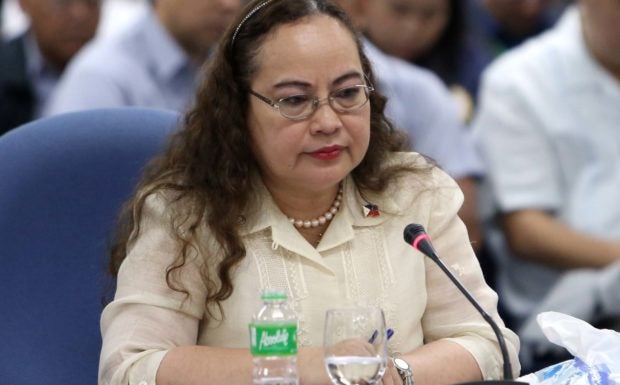 Former Health Secretary Paulyn Jean Ubial expressed outrage at being sued for libel by the couple Oscar and Janette Garin over Ubial’s testimony at the Senate on the Dengvaxia controversy, describing the suit as harassment meant to stop her from further testifying.

Ubial testified at a Senate hearing on Dengvaxia pointing to Janette, Ubial’s predecessor as health secretary, as the one who fully implemented the Department of Health (DOH) plan to acquire the antidengue vaccine and administer it to hundreds of thousands of children nationwide.

Ubial also testified that Oscar was one of several congressmen who requested for more of the vaccine for their districts.

“It’s just harassment!” Ubial said in a text message. “What is my motive [to destroy the reputation of the Garins]?” she said. “I’m nobody now! Jobless, penniless, apolitical!” Ubial continued.

Janette said in the complaint that she “felt so much maligned and dishonored” by Ubial’s testimony, which is considered as privileged communication protected from libel.

Oscar said Ubial “made it appear that I was harassing or pressuring her so that the government would be buying more dengue vaccines.”

Dengvaxia, which was developed by French pharmaceutical giant Sanofi, was being blamed for several deaths of children who contracted dengue. The DOH, under Garin, spent a total of P3.5 billion on Dengvaxia. —WITH A REPORT FROM NESTOR P. BURGOS JR.