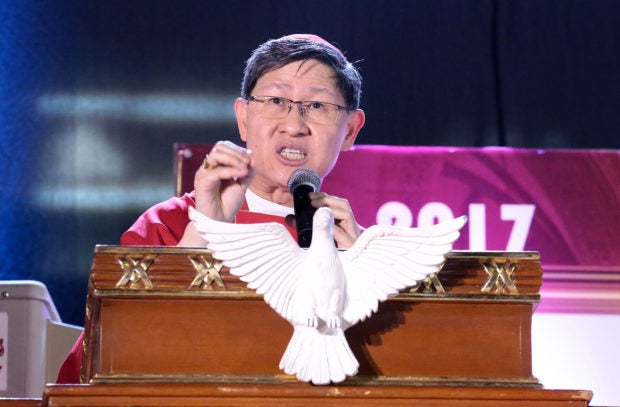 Stressing that life is a gift from God, Manila archbishop Luis Antonio Cardinal Tagle appealed to the faithful to value the life of their enemies and society’s so-called outcasts.

In his homily during a Mass for the Walk for Life prayer rally, the prelate said Filipinos should value life even if it is one whom they consider to be an enemy or they don’t like.

“Let us bring back the belief that people are not simply objects which we can derive benefits from, but they are humans. Their life is a gift from God that should not be discarded,” Tagle said.

Tagle was the main celebrant of a Mass at the Quirino Grandstand in Manila, where the second Walk for Life was held on Saturday morning.

He warned that life is often the first casualty when people start to think of other people in terms of their worth or usefulness, instead of looking at people as the gift of life.

Life is a gift from God. But when we start thinking of other people’s lives in terms of their usefulness to us, it becomes so easy for us to just do away and discard life,” Tagle said.

He added: “When there is someone who seems to have lost his way in life, do we see him as a gift of life, or an outcast of society that we should sweep away and discard?”

Police estimated the number of participants to be around 2,000, as members of Catholic lay groups and those from religious orders arrived at the Quirino Grandstand around 4 a.m. Saturday.

They carried different placards and banners condemning the spate of extra-judicial killings amid President Duterte’s war against illegal drugs, the administration’s moves to amend the 1987 Constitution, and the approval of a divorce bill at the House of Representatives.

The participants walked around the Quirino Grandstand as they sang the “Ave Maria” and recited the Rosary, after which they returned to the parade grounds.

Actress Cherry Pie Picache, a known anti-death penalty advocate, spoke to the crowd about the importance of valuing the dignity of life.

The program ended around 8 a.m., with Tagle expected to celebrate a Mass at the EDSA Shrine later at noon today.