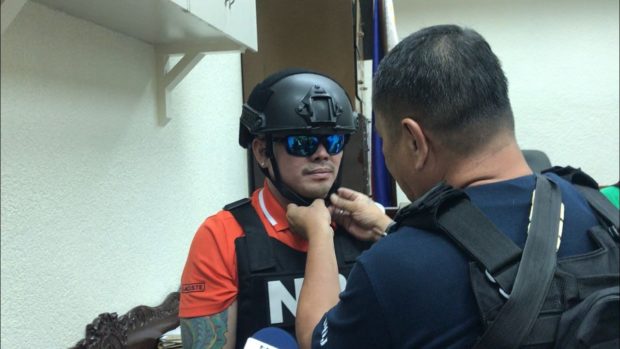 A member of the Witness Protection Program-Intelligence Service Operations Group (WPP-ISOG) places protective helmet on Kerwin Espinosa who attended the hearing for his drug case at the Manila RTC. The hearing was reset since no one was representing Kerwin during the court proceeding. His lawyer was killed last Feb. 19, in Cebu. INQUIRER.net / Tetch Torres-Tupas

Ungab was shot to death after attending the promulgation of a case against Kerwin Espinosa in Cebu.

(I am asking for indulgence in what the prosecutor is saying that I already lawyers who did not attend the hearing today. It’s not that simple.)

Ungab was killed last Feb. 19 after attending the promulgation of a case against the young Espinosa. Kerwin was sentenced to a one year prison term for violating the 2010 election gun ban but acquitted of illegal possession of firearms.

Ungab is the second lawyer of the Espinosas to be killed. On Aug. 23, 2016, Rogelio Bato Jr. was shot dead by men riding a white pick-up vehicle and a motorcycle in Tacloban City, Leyte. /jpv