Runaway cow in Poland dies ‘from stress’ after recapture 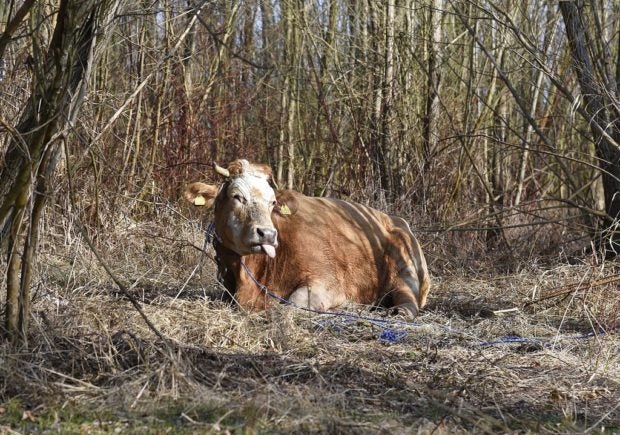 A Limousin beef cow, which escaped in January while being taken to a slaughterhouse and roamed free and avoided captivity for weeks, is recaptured to be transported to a farm near Lake Nyskie in southwestern Poland on Thursday, February 22, 2018. However, the cow died a few hours after recapture due to apparent stress.  (AP Photo/Maciej Zych)

WARSAW, Poland — A runaway cow that avoided captivity for weeks died on Thursday after it was caught and put on a truck to be taken to a farm, a local official said.

The red Limousin beef cow fled on January 23 as it was to be transported to a slaughterhouse. It gained celebrity status as it defended its life and freedom, tricking searchers, swimming from island to island, and roaming a lake-filled region near Nysa, in southwestern Poland.

Bartosz Bukala, a spokesman for Nysa authorities, told The Associated Press that the cow had been captured but died while being transported to a local governor’s farm where it was to be kept.

Local internet portal nto.pl said a team of five, including a veterinarian, moved early Thursday to capture the animal, valued at some 5,000 zlotys ($1,500,) near the village of Siestrzechowice.

It took a few hours and three shots of sedatives before it was put on a truck, but the animal died there, apparently from stress, the report said.

In January, another runaway Limousin cow was spotted roaming farm fields in the company of a herd of bison in eastern Poland, three months after escaping its pen.            /kga