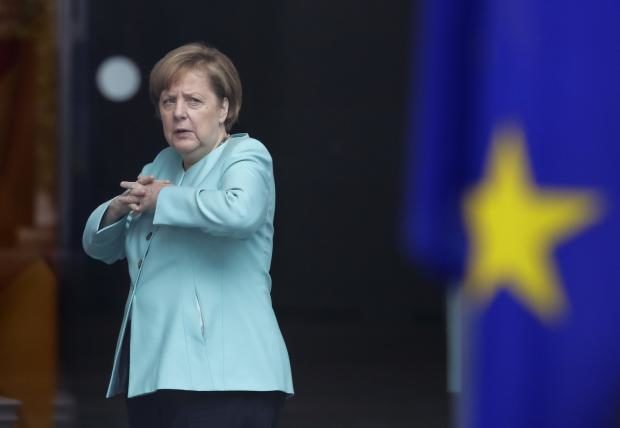 German Chancellor Angela Merkel stands behind a European flag as she waits for the arrival of Chinese President Xi Jinping at the chancellery in Berlin, Germany, Wednesday, July 5, 2017. Merkel warned Wednesday that China must not link its investments in the western Balkans to political demands. AP

BERLIN, Germany — German Chancellor Angela Merkel warned Wednesday that China must not link its investments in the western Balkans to political demands.

“I have no objections to the fact that China wants to trade … and to invest,” Merkel said at a Berlin joint press conference with Macedonian Prime Minister Zoran Zaev.

“We are committed to free trade,” she added, but stressed that “it must be reciprocal” and that openness must come “not just from one side but from all sides”.

“The question is … are the economic relations being linked with political questions?” she added, stressing that this would “not be in the spirit of free trade”.

Recent years have seen China make investments in strategic sectors and critical infrastructure, including the purchase of Piraeus port in crisis-hit Greece.

Some in Europe fear that the Balkan countries benefiting from Chinese investments are more inclined to defend the interests of Beijing in the EU, especially on questions of human rights and trade.

In Macedonia, which is seeking to join the EU and NATO, China has invested in highway construction, and Zaev recently thanked Chinese counterpart Li Keqiang for helping his country’s modernization.

French President Emmanuel Macron on a recent China visit warned that some European countries are much more open to Chinese interests, “sometimes at the expense of a European interest”.

German Foreign Minister Sigmar Gabriel warned last August in Paris that “if we don’t develop a (European) strategy regarding China, then China will succeed in dividing Europe”. /cbb