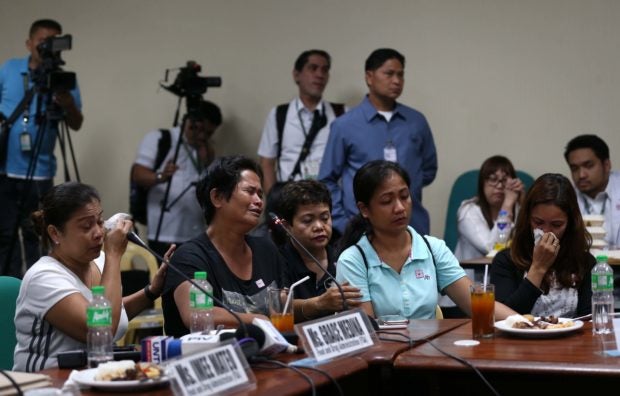 (Editor’s note: We are reposting this story to correct an earlier one posted that named Dr. Benjamin Co as one of the health officials relieved due to their alleged involvement in the Dengvaxia mess. He was never involved in the Dengvaxia controversy.)

Sen. Richard Gordon on Wednesday said the Aquino and Duterte administrations were liable in the Dengvaxia controversy because they had pushed and continued the implementation of the dengue vaccination program.

At the sixth hearing on the Dengvaxia mess, Gordon said the scientists he talked to had said the government should not have pushed for the mass immunization, which it started in 2016.

The senator also said that based on the accounts of parents, the Department of Health (DOH) did not inform them about the dengue vaccine, including its side effects.

“You are liable. We are liable. The taxpayers become liable and if you want to save on costs, do it now before someone exploits them,” Gordon said.

He said the DOH should coordinate with the Department of Education and all concerned to ensure that the inoculated children were monitored.

Health Secretary Francisco Duque III said he would ask President Rodrigo Duterte and Congress if the DOH could use the P1.16 billion refunded by Dengvaxia’s French manufacturer, Sanofi Pasteur, for the unused vaccines to fund the hospital treatment of the inoculated children.

Gordon said experts should also listen to Dr. Erwin Erfe of the Public Attorney’s Office (PAO) who autopsied 22 children who died after getting the vaccine.

PAO chief Persida Rueda-Acosta said her office was looking at 40 more deaths from Dengvaxia, including those of three children in Nasugbu, Batangas.

Erfe presented the results of his autopsy, saying the 22 children had never had dengue and were given at least a dose of the vaccine.

“They died as early as 11 days [and as late as]  eight months after the last dose,” he said.

Eighteen of the 22 children had brain hemorrhaging, and seven had severe brain bleeding, he said.

Eight of them also completed the three doses and four died due to dengue, he also said.

Sen. JV Ejercito said he was glad that the PAO would share its findings with the University of the Philippines-Philippine General Hospital experts. —With a report from Tina G. Santos