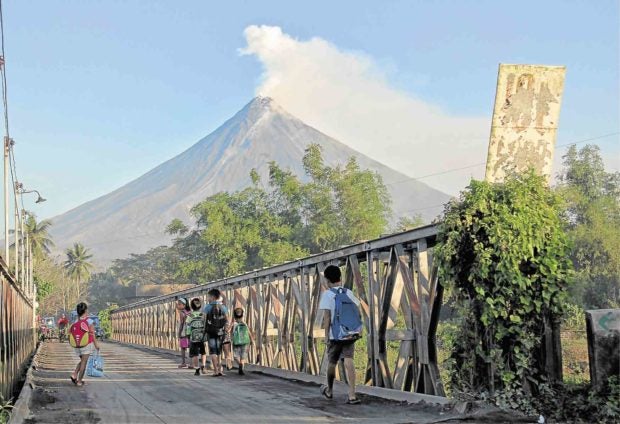 Children walk to school as classes continue in Daraga town, an area outside the danger zone of Mayon volcano in Albay province.

LEGAZPI CITY — The more than 66,000 people staying in evacuation centers in Albay province will not be able to go home yet as government volcanologists continue to observe abnormal activities on Mayon volcano, more than a month after it spewed ash and lava, an official said.

Cedric Daep, chief of the Albay Public Safety and Emergency Management Office (Apsemo), said the provincial government could not order the 17,239 families in 57 evacuation centers around Mayon to return to their home villages unless they get a recommendation from the Philippine Institute of Volcanology and Seismology (Phivolcs).

Government volcanologists have observed a reversal of what they described as a downward trend of Mayon volcano’s tilt or ground deformation on Monday night.

Mariton Bornas, chief of the Phivolcs’ Volcano Monitoring and Eruption Prediction Division here, said although they saw a decrease in ground deformation the past few days, their monitoring parameters recorded that the tilt on Mayon’s middle slope had increased yet again.

“Overall, the volcano is still inflated. The tilt on the lower elevation has plateaued, but the seeming downward trend of the tilt on the middle slope was not sustained,” she said.

The increase in the volcano tilt is Phivolcs’ indicator of magma intrusion or a steady supply of magma.

Initially, Bornas said, the Phivolcs would assess on Wednesday whether to lower the alert level from 4 (hazardous eruption imminent) to 3 (increased tendency toward hazardous eruption) or to narrow down the danger zone from 8 kilometers.

But the overnight changes, including lava fountaining, had forced the institute to delay the assessment. —REY ANTHONY OSTRIA

Stopping ABS-CBN operations is prior restraint