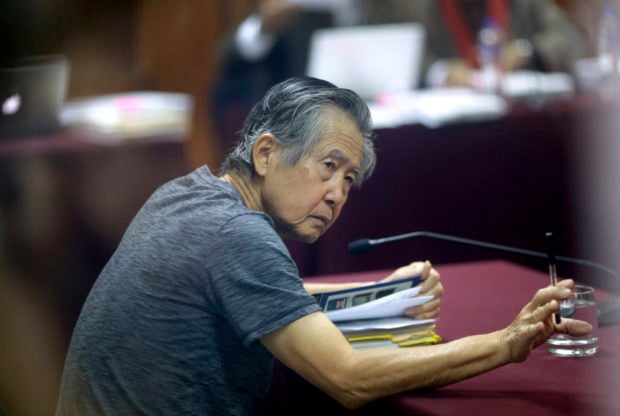 In this April 23, 2014 photo, jailed former Peruvian President Alberto Fujimori attends his trial at a police base on the outskirts of Lima, Peru. (AP FILE PHOTO/Martin Mejia, File)

A Peruvian court ordered former president Alberto Fujimori on Monday to stand trial for the 1992 killings of six farmers, arguing that he lacks immunity despite a recent pardon for a different crime.

The National Criminal Court said that the pardon granted to Fujimori in a human rights case for which he was serving a 25-year sentence did not apply to the murders of the group.

Prosecutors asked to try the ex-president and 22 others for the death squad killings.

Fujimori, 79, was pardoned by the current Peruvian president, Pedro Pablo Kuczynski, on December 24 on humanitarian grounds because of ill health.

The former leader had been serving a sentence for crimes that included commanding death squads that killed suspected civilian sympathizers of left-wing guerrillas that his regime was fighting.

The pardon triggered street protests in Peru and was slammed by international rights groups as a blow in the struggle against impunity.

Kuczynski’s pardon was seen by many as quid pro quo for help from Fujimori’s lawmaker son, Kenji, days earlier in beating an impeachment vote in Congress over alleged corruption.

Miguel Perez, Fujimori’s attorney, said it was not yet clear if the issue of immunity could be addressed again.

Perez told local media that he tried to have the ex-president serve as a witness in the new case, but failed.

“So in this trial, he simply will be listed as one of the accused,” Perez said.

Prosecutors are seeking 25 years in prison for the 79-year-old ex-leader of Peru.

“Mr. Fujimori now has resumed his status as a defendant, and in the case of the pardon there was no sensible justification,” said human rights lawyer Carlos Rivera.

Kuczynski had pledged not to pardon Alberto Fujimori. But he did so just days after Kenji Fujimori’s vote in his favor, sparking speculation the pardon was a political quid pro quo.

Rights groups and relatives of victims asked the Inter-American Court of Human Rights earlier this month to rule against a pardon for Fujimori.

Kuczynski – who defeated Keiko Fujimori for the presidency in 2016 – said he had pardoned the ex-president for humanitarian reasons.

The pardon has drawn heavy criticism from victims of Fujimori’s 1990-2000 rule, as well as their relatives and human rights advocates.

Two United Nations human rights experts also said that the pardon was a “slap in the face” to victims of his brutal rule.

“The presidential pardon granted to Alberto Fujimori on politically motivated grounds undermines the work of the Peruvian judiciary and the international community to achieve justice,” UN special rapporteurs Agnes Callamard and Pablo de Greiff said in a statement in December 2017.

“We are appalled by this decision. It is a slap in the face for the victims and witnesses whose tireless commitment brought him to justice,” they also said.

Still, Fujimori earned respect from many Peruvians for his ruthless and unflinching campaign to defeat leftist guerrillas during his presidency.                /kga