DAVAO CITY — Mayor Sara Duterte-Carpio has teamed up with Mindanao politicians, some of whom Speaker Pantaleon Alvarez had eased out of Partido Demokratiko Pilipino-Lakas ng Bayan (PDP-Laban), to form a new political party and consolidate “local ground forces and resources” to support the administration of her father, President Rodrigo Duterte.

It was not immediately known why the fifth governor, Douglas Cagas of Davao del Sur, was not among those who joined Duterte in forming HNP.

Both Del Rosario and Floirendo had a falling out with Alvarez, secretary general of the administration party PDP-Laban.

“It’s a regional party. [We] want to unify,” Mayor Duterte-Carpio told the Inquirer.

An invitation letter sent out by HNP for its Feb. 23 general assembly at Davao Convention and Trade Center here identified Duterte as party chair.

Bautista will serve as HNP president while Dayanghirang as vice president. Del Rosario is the party’s secretary general while Uy is treasurer. 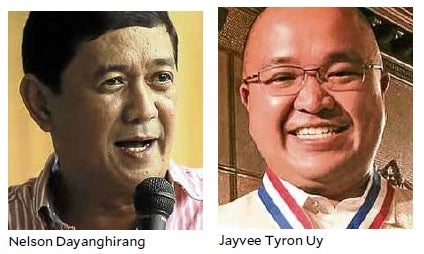 Duterte-Carpio said HNP had no links with PDP-Laban, which her father used as a vehicle in his campaign to become President in 2016.

“No links with [PDP-Laban]. Only Governor Uy is [a PDP-Laban member]. I ran under Hugpong sa Tawong Lungsod, the local party in Davao [City],” she said.

HNP, according to invitation letters sent to prospective members and signed by Mayor Duterte and Bautista, was “formed with the vision of consolidating local ground forces and resources in support of the administration of President Duterte.”

“Through [HNP], we shall empower Southern Mindanao and strengthen its capacities as a bloc responsive to the needs of its people and communities for employment, roads and bridges, agricultural support, education, livelihood, medical facilities, among others,” it said.

It described those invited to the event as “an ally and partner.”

Del Rosario said party leaders and prospective members would discuss the registration of HNP with the Commission on Elections, among other things, during the Friday assembly. —Allan Nawal