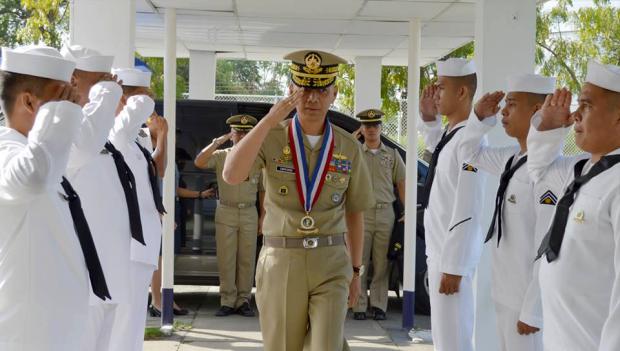 “I’m not pushing for Hanwha. I’m still preferring Tacticos, but contract says it is the supplier that will have a sole decision to decide on what system to put in our frigate,” he told the Senate committee investigating the frigate acquisition project on Monday.

Empedrad previously worked with the Technical Working Group for the project before he became Navy chief. He originally backed the use of Tacticos for the CMS but changed his tune in compliance with the contract.

Sen. Panfilo Lacson asked the Navy for a copy of the minutes of the Technical Working Group workshop held from Sept. 26 to 30, 2017, to check the provisions inserted in the contract.

Thales Tacticos was the original preference of the Navy for the CMS of the two frigates.

The previous Navy chief, Vice Adm. Ronald Joseph Mercado, was relieved from his post for allegedly insisting on this brand.

Hanwha Systems, the chosen supplier of Hyundai Heavy Industries, supposedly did not meet the specifications in the contract and was not a “proven” technology, unlike Tacticos, which is used in as many as 23 countries.

Defense Secretary Delfin Lorenzana accused Mercado of delaying the project, removing him of his post last December for “insubordination.”

Lorenzana said they could purchase Tacticos, but it would cost them more.

He said it would need an additional cost of at least $14 million – or $7 million for each frigate.

The frigate project costs P18 billion, including its weapons and munitions. /atm