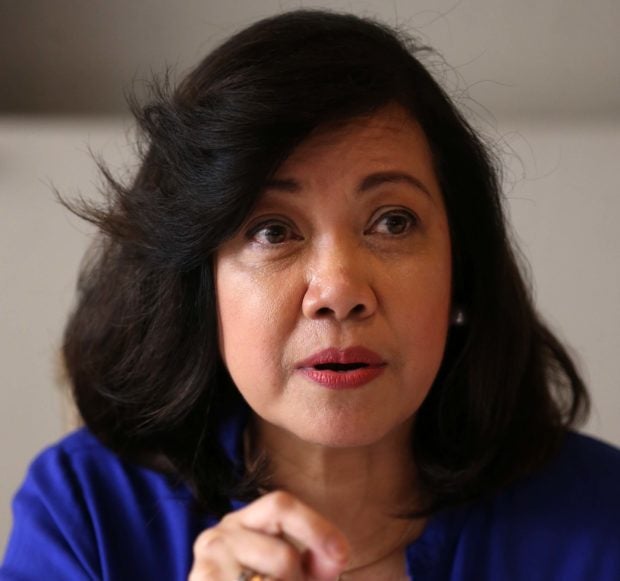 “Not true,” Branch 205 Judge Amelia Fabros-Corpuz said, even going so far as to say this accusation by complainant Lorenzo Gadon was a “blatant lie.”

“I have not received any instruction to that effect, either directly or indirectly,” said Branch 206 Judge Patria Manalastas-de Leon, who recently availed of early retirement.

Likewise, Deputy Court Administrator Jenny Lind Aldecoa-Delorino, the official in charge of Muntinlupa RTC, said: “Personally, I did not receive any instruction from the Chief Justice to call any of the judges handling the case against Senator De Lima.”

Branch 204 Judge Juanita Guerrero, who issued an arrest warrant days after the illegal drug charges were filed before the court in February 2017, did not appear before the House.

But, Delorino said Guerrero “told me categorically that she did not receive any phone call from any official of the Supreme Court and neither did she receive any directive from the Chief Justice not to issue an arrest warrant.”

During a hearing by the House of Representatives justice committee on Gadon’s impeachment complaint, Delorino said she tended to call judges handling high-profile or controversial cases to provide administrative assistance.

“I coordinate with the judges to ask them if they need anything like additional staff, additional stenographers, if they require security, and we also remind them of the guidelines regarding dealing with the media,” she told lawmakers.

Gadon maintained that he “heard from the employees” that a deputy court administrator called the Muntinlupa judges regarding the warrants against De Lima, although he could not identify the said official.

Justice committee chair Rep. Reynaldo Umali noted Gadon’s allegation was only based on hearsay so far, and if it were not true, it would be a waste of the committee’s time.

“Let me put you to task, you better put up and substantiate [the allegation], because in a separate inquiry to be conducted by the justice committee on this particular matter, we would like to arrive at the truth,” Umali said.

The other committee members, however, were inclined to believe that the “circumstances” showed Sereno’s interference in the opposition senator’s case.

This was because, unlike Guerrero’s quick action (who had since inhibited from the case), Fabros-Corpuz and Manalastas-de Leon only issued arrest warrants and assumed jurisdiction over the senator in June and November, respectively.

Fabros-Corpuz cited the pendency of De Lima’s omnibus motion questioning the basis of her indictment as well as the RTC’s jurisdiction over the case.

Meanwhile, Manalastas-de Leon said she deferred from resolving de Lima’s motion to quash and issuing an arrest warrant because the senator’s case questioning Guerrero’s orders was already elevated before the Supreme Court.

Former President Gloria Macapagal-Arroyo, who appeared in the impeachment proceedings for the first time, noted she was swiftly arrested at a hospital a mere two hours after her electoral sabotage case was filed before the Pasay RTC in November 2011.

Rep. Rodante Marcoleta, who sat beside her, cited Arroyo’s quick arrest in questioning why Fabros-Corpuz and Manalastas-de Leon took longer to issue their warrants against De Lima.

“That did not inspire you, Judge Corpuz, Judge de Leon? Here’s a former president of the country, being served a warrant of arrest two hours after the filing of the case,” Marcoleta said.

“In your case, simply because the accused is so, I would say, diligent in filing one motion after the other, utilizing every dilatory tactics available in this country, so you defer the issuance of a warrant of arrest which is a ministerial duty,” he added. “That gives us a fertile idea that there is some basis for this allegation.”

Rep. Vicente Veloso, a former Court of Appeals justice, said of Corpuz’s explanation: “That does not correct the impression that somebody told you not to issue a warrant of arrest.” (He was more accepting of the statement of Manalastas-de Leon, the wife of CA Justice Magdangal de Leon, who was once his colleague.)

Deputy Speaker Gwendolyn Garcia said: “Let’s say it’s hearsay. But, the circumstances surrounding this particular instance seem to be as strange as the other goings-on in the Supreme Court that we have uncovered.”

Sereno’s spokesperson Jojo Lacanilao, however, said in a statement that the denial of the judges and the deputy court administrator meant Gadon committed perjury and his allegation was “without any basis whatsoever.”

“The only conclusion that can be drawn is that Atty. Gadon had completely made up his allegation,” Lacanilao said. “This accusation is plainly and simply perjurious and should not merit any further consideration.”