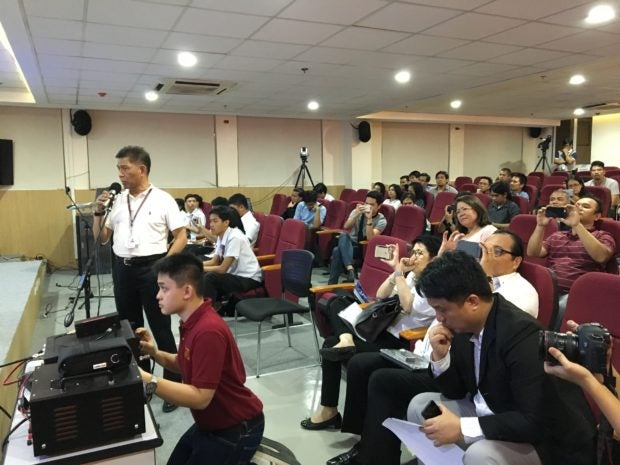 SPACE TALK TRY Leo Almazan, a “balik” scientist of the Department of Science and Technology, tries but fails to make contact with the crew of the International Space Station on Saturday night. —JOVIC YEE

Getting to talk to astronauts on the International Space Station (ISS) was supposed to be a first for Filipino students. But the live contact session on Saturday night didn’t work out as planned.

Eight high school students from the University of the Philippines and Holy Angel University anxiously waited as scientists and engineers from the Department of Science and Technology (DOST) tried to establish contact with the ISS crew through amateur radio.

The 10-minute window for making contact closed and the ISS crew did not acknowledge Manila’s call.

While the DOST has yet to ascertain the cause of the failure to connect with the astronauts, balik scientist Leo Almazan, who oversaw the activity, assured the public that the connection of the Philippine team was good as the radio and antenna it used worked just fine.

Almazan said the team would discuss on Sunday with its partner, the Amateur Radio on the International Space Station, to determine what exactly happened.

While they missed the opportunity to talk with the astronauts, UP Grade 11 student Alexandra Arugay understood that there was risk of failing to establish contact with the ISS crew because there were no dry runs before the event.

While the students didn’t get the opportunity to ask the astronauts their prepared questions, they were glad to learn more about the advancements made by the DOST, particularly in the development of space hardware, according to Arugay.

The DOST presented to the students the country’s first microsatellite, Diwata-1, and updated them on the status of Diwata-2, which is set to be launched in June.

Unlike its predecessor, Diwata-2 will not be launched from the ISS but will be directly deployed through the rocket that it will piggyback on.

Diwata-2 will have an enhanced resolution camera and amateur radio, giving it communication capabilities.

Because of these developments, Arugay said students like her were becoming more hopeful of possible careers in the country’s science and technology sector.

In May, Almazan said the Philippines would get another shot at making contact with the ISS crew.

He said the Filipino scientists would talk it out with their Australian counterparts to help them connect with the ISS crew should another problem arise.