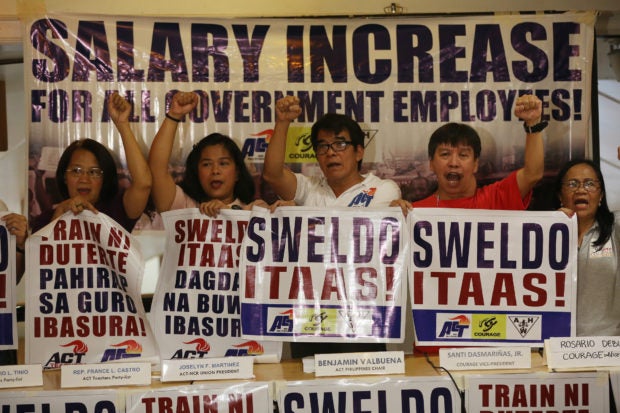 Government workers from a broad slice of sectors are uniting in an unprecedented alliance to demand a P16,000 national minimum wage and P30,000 entry-level salary for teachers and nurses, union leaders announced on Sunday.

To press their demand, they will stage a nationally coordinated protest on Feb. 21.

The Alliance of Concerned Teachers (ACT Teachers) together with the Makabayan bloc will file two bills, for a salary increase in the public and private sector, in Congress this week.

“We have no other option except to fight back,” said ACT Teachers chair Benjamin Valbuena, who added that at least 1,000 teachers and government employees were expected to join the Feb. 21 march at 2 p.m. from the University of Santo Tomas to Mendiola.

He said they were open to “escalating” their protests to work stoppage or a sit-down strike if their demand for a salary raise would not be included in the national budget.

Valbuena noted the swiftness with which President Duterte managed to double the salaries of the Philippine National Police and Armed Forces of the Philippines earlier this year, while his campaign promise of a bigger salary for teachers had stalled.

“It was a buyout of the loyalty of uniformed personnel to prevent a coup d’état,” he said.

ACT Teachers Rep. France Castro told the Inquirer that she expected wide support from within Congress for the bills.

She added that they had already courted possible coauthors from outside the Makabayan bloc, and would urge Sen. Win Gatchalian to file a counterpart bill in the Senate.

ACT Teachers Rep. Antonio Tinio on Sunday also stressed the need for a “decent salary” now rather than in 2020, when the current Salary Standardization Law will have run its course.

Other areas participating in the Feb. 21 protest are Davao City, the Cordillera Administrative Region, Cebu province and Iloilo province.