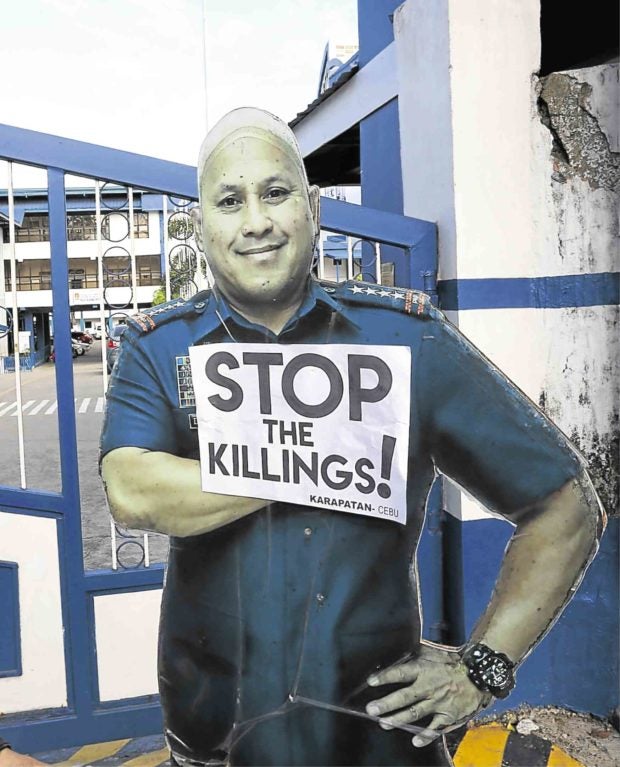 Activists attach a “Stop the Killings” poster on a cardboard image of Philippine National Police chief Ronald dela Rosa during a rally in front of a police headquarters in Cebu City in November last year. —JUNJIE MENDOZA/CEBU DAILY NEWS

While President Rodrigo Duterte may have used the word “kill” in his speeches against drugs, Philippine National Police chief Director General Ronald “Bato” dela Rosa said it didn’t mean the President was ordering police to gun down drug suspects indiscriminately.

Dela Rosa said Mr. Duterte’s “kill” speeches actually meant only two things: encourage police to continue the war on drugs and “give a strong warning to drug personalities that whey will die if they fight.”

“The President has no specific instruction for me to kill pushers, addicts or drug lords,” the PNP chief said in an interview with reporters at the Philippine Military Academy homecoming.

Dela Rosa made the statements in reaction to reports that the International Criminal Court (ICC) had started investigating Mr. Duterte and other officials for extrajudicial killings (EJKs) in relation to the war on drugs.

He said he was confident that the ICC would find no state involvement in the killings or Mr. Duterte’s hand in the bloodshed. Those linking the President to the killings, Dela Rosa said, “would be proven wrong.”

ICC investigators, he said, “can look straight into my eyes” to check if he would lie about Mr. Duterte’s innocence in the killings. “They can even subject me to a lie detector test anytime,” Dela Rosa said.

He said the PNP would cooperate with the ICC probe but be wary about “falling into a trap.” Requests for documents, he said, would have to go through a “proper process.”

The ICC investigation, Dela Rosa said, might have started from a “smear campaign.”

“We are not that stupid,” Mr. Duterte’s most trusted police official said. He said attempts to bring down Mr. Duterte would fail because the President’s trust rating was high, 83 percent.

“You want to bring down the Duterte administration? Over my dead body,” Dela Rosa said.

“I challenge you to a war. You want to launch a coup d’etat? Do that and let’s go to war. You do not scare me,” he said, addressing unidentified groups which the PNP said was plotting to unseat the President.

He repeated his promise to cooperate with the ICC probe “but not to the extent that we will fall into their trap.”