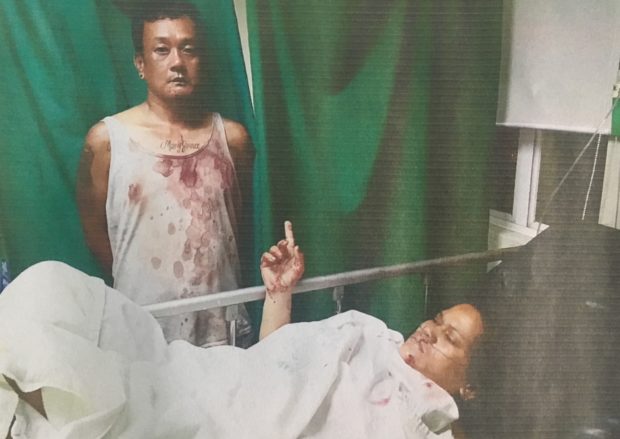 Victim Joan Bongares, who survived being stabbed 46 times with three different bladed weapons, points to Michael Franco as the suspect. Franco is an alleged member of notorious criminal gang Sputnik and will be facing charges of robbery, frustrated murder and violation of Sec 11 of RA 9165. Photo courtesy of the Caloocan City Police

A suspected member of the notorious Sputnik Gang was arrested after he robbed and stabbed a woman at least 46 times in her apartment in northern Caloocan City on Friday.

Suspect Michael Franco, 38, will undergo inquest proceedings for charges of robbery and frustrated murder after repeatedly stabbing victim Joan Bongares, 33, first with an ice pick and then with a fork and kitchen knife.

Franco was alleged to be a member of Sputnik and was in and out of jail for several criminal charges, including robbery, said Senior Insp. Dennis Odtuhan, northern Caloocan police investigation unit chief.

Franco was also believed to be under the influence of illegal drugs as two sachets of “shabu” (crystal meth) were found in his possession upon his arrest, the police official added.

Police report said at around 4:30 p.m., the suspect and two other men arrived at Bongares’ apartment along Sagrado Village, Barangay 167 and pretended to be interested in renting a room.

Franco and Bongares then engaged in a scuffle inside the house. While on the floor, the victim was being stabbed several times, first with an ice pick and then a fork and kitchen knife.

Bongares then pretended to be dead while Franco and the two men tried to escape.

Franco was later caught by neighbors, one of them PO3 Jev Melendez of the Quezon City Police District-Novaliches Station. The suspect’s two accomplices remained at large.

Franco, who admitted to the crime, will also face charges of possession of illegal drugs.

Bongares, meanwhile, is recovering at a hospital in Quezon City. /jpv