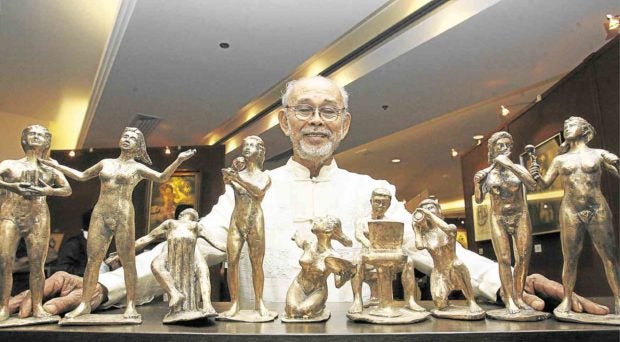 ‘A MONUMENT UNTO HIMSELF’ National Artist Napoleon Abueva during the opening of his “100 Nudes, 100 Years” exhibit at Gateway Mall in 2008. —EDWIN BACASMAS

The art world is mourning the death of National Artist for Sculpture Napoleon C. Abueva, who passed away on Feb. 16 at the National Kidney and Transplant Institute in Quezon City. He was 88.

Daughter Amihan Abueva said her father, widely acknowledged as the “father of modern sculpture” in the Philippines, died at 5:30 a.m. of pneumonia.

“We shall miss him tremendously,” said Lay Ann and glass sculptor Ramon Orlina. “We are so glad we managed to visit him on his birthday last Jan. 26 while he was in the ICU (intensive care unit).”

Artist and critic Cid Reyes paid tribute to Abueva and called him “the sole Filipino vanguard for modern sculpture.”

“With his now sad demise,” Reyes added, “Abueva has entered immortality, but he leaves behind an incomparable legacy: a great, stunning body of modernist works—counting over 600 known works!—created through many decades and executed in a diversity of mediums, both organic and industrial.”

“The Philippine art and cultural community thus grieves at his passing,” Reyes said. “Fittingly, with his release from this mortal coil, Napoleon Veloso Abueva has become … an enduring monument unto himself.”

The National Commission for Culture and the Arts (NCCA) said it was awaiting word from Abueva’s family regarding funeral details in order to finalize state necrological ceremonies at the Cultural Center of the Philippines.

The NCCA said that as National Artist, Abueva would also be buried at the Libingan ng mga Bayani.

The future National Artist was born in Tagbilaran, Bohol, on Jan. 26, 1930, to a prominent political family in the province.

His interest in sculpture began at an early age, when he would mold animal figures from mud. His early experiments, however, were interrupted by the outbreak of World War II.

Both his parents were active in the resistance, and were eventually captured and killed by the Japanese. Abueva himself was imprisoned and tortured.

After the war, Abueva continued to pursue his interest in art, winning a scholarship in 1951 that allowed him to enroll in the University of the Philippines (UP) College of Fine Arts, where he graduated in 1953.

Thanks to a series of scholarships, he was able to pursue advanced studies in the United States, culminating in a stint at Harvard University in 1956.

Back in the Philippines, he was mentored by Guillermo Tolentino, the creator of the Oblation, who would also become a National Artist.

Abueva’s early works were done in the classical style of Tolentino, but he would soon go on to create works in various modern styles. A protean talent, he became adept at using different materials, including wood, stone, marble, brass and steel.

Some of his best-known works are “Judas’ Kiss,” “Kaganapan,” “The Transfiguration,” the marble murals in the National Heroes Shrine in Bataan and the Blood Compact Shrine in Tagbilaran.

He would later become dean of the UP College of Fine Arts, and influence generations of Filipino sculptors. In 1976, he was named National Artist for Sculpture, the youngest recipient of the honor at 46.

Abueva is survived by his wife, Cherry, and children Amihan, Mulawin and Duero; sisters Ching and Inday, and brother Jose, former president of UP.

He also leaves behind a considerable body of work, which is now part of the cultural legacy of the country.

Abueva’s remains will lie at the UP chapel in Diliman, Quezon City.