Talks with Reds still off despite Norwegian envoy’s visit – Roque 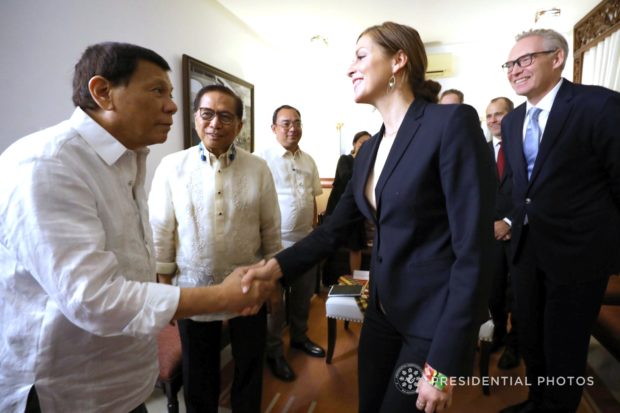 President Rodrigo Duterte welcomes Norwegian Special Envoy to the Peace Process Between the Government of the Philippines and the National Democratic Front of the Philippines Idun Tvedt as the latter paid a courtesy call on the President at the Presidential Guest House in Davao City on February 15, 2018. Also in the photo are Presidential Adviser on the Peace Process Jesus Dureza. KARL NORMAN ALONZO/PRESIDENTIAL PHOTO

President Rodrigo Duterte is not yet inclined to resume peace talks with the communist rebels even after his meeting with Norwegian Special envoy for the Philippine peace process Idun Tvedt.

Duterte and Tvedt met on Thursday night in Davao City and their talks were described as “warm and open” by Presidential Spokesperson Harry Roque.

While Duterte said during the meeting that the Philippines remained committed to achieving peace, Roque said it would not signal the resumption of peace talks.

Asked why the President was unenthusiastic to resume talks with rebels, Roque said the government does not see any sincerity on the part of the communists.

Roque said there was nothing to blame but the NPA for the collapse of the peace talks.

He said government offensives against the rebels would continue.

On November 23, 2017, Duterte signed Proclamation No. 360, formally terminating the peace talks with the communist rebels.

He also signed a proclamation declaring the CPP-NPA as a terrorist organization.