‘Numerous fatalities’ in US school shooting, suspect in custody 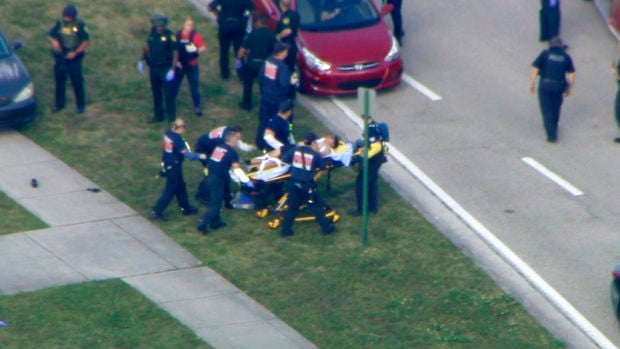 In this frame grab from video provided by WPLG-TV, emergency personnel wheel an injured person from the Marjory Stoneman Douglas High School in Parkland, Florida, following a shooting there on Wednesday, Feb. 14, 2018. AP

The Broward County Sheriff’s Office said a suspect was in custody following the incident at Marjory Stoneman Douglas High School in Parkland, a city about 50 miles (80 kilometers) north of Miami.

A federal official has identified the Florida school shooting suspect as Nicolas Cruz.

Broward County Sheriff Scott Israel said the suspect was a former student and about 18 years old.

Israel said the suspect was arrested without incident off school grounds in a nearby community. He didn’t elaborate on when the suspect attended the school.

The shooting, one of several in the United States since the start of the year, will once again throw the spotlight on the country’s epidemic of gun violence and the ready accessibility of weapons, with 33,000 gun-related deaths annually.

The superintendent of the county’s school district, Robert Runcie, said he believed there were “numerous fatalities,” and that the gunman may have been a former student.

“Just a horrible day for us,” Runcie said, adding that the incident appeared to be over.

So far, 14 “victims” had been or were being taken to local hospital, the sheriff’s office said. Earlier reports suggested that between 20 and 50 people had been hurt.

“This is a very tragic situation for everybody involved,” Parkland Mayor Christine Hunschofsky told CNN, adding that she had spoken to a number of students.

“They were very scared,” she said. “And almost in shock when they came out.”

Asked about security, the mayor said a police officer is always stationed at the school and there was a “single point of entry.”

Television images showed students being led out of the school by heavily armed police officers and an armored vehicle filled with a SWAT team arriving at the scene.

One injured victim was seen being placed into an ambulance on a stretcher.

Police officers in helmets, bulletproof vests and armed with automatic weapons could be seen stationed at several points around the sprawling school complex, which houses nearly 3,000 students.

Student Jeiella Dodoo told CBS News that she and her schoolmates had evacuated their classroom calmly after hearing what they thought had been a routine fire alarm.

“The alarm went off so we had to evacuate from our classes,” she said. “Then we heard gunshots.

A math teacher at the school told CBS that he was hiding with six of his students.

Caesar Figueroa told CNN his daughter was hiding in a closet and texting her family.

“She’s trapped with her 10 friends. She said she heard gunshots. A window blew and everybody is screaming and running, and she said she ran in the closet and she’s still there,” Figueroa said.

No child should ‘feel unsafe’

“My prayers and condolences to the families of the victims of the terrible Florida shooting,” President Donald Trump said on Twitter.

“No child, teacher or anyone else should ever feel unsafe in an American school.”

Since January 2013, “there have been at least 283 school shootings across the country — which averages out to one school shooting a week,” according to Everytown for Gun Safety, a non-profit group that advocates for gun control.

Since the 2012 massacre at the Sandy Hook Elementary School in Newtown, Connecticut, where 20 children and six adults were shot dead, warning procedures and emergency drills have multiplied at US schools.

The goal is to teach school children how to react to a shooter who opens fire at random. /cbb